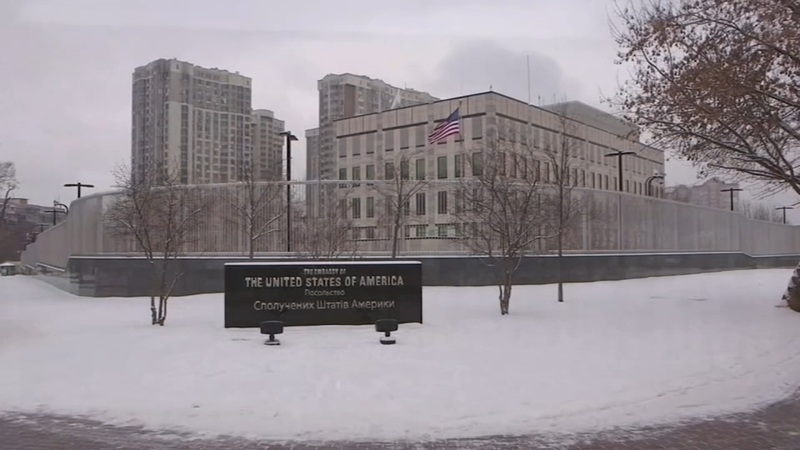 FAYETTEVILLE, N.C. (WTVD) -- The US is readying 8,500 troops for possible deployment as tensions between Russia and Ukraine continue to escalate.

While stressing that the troops would not be sent into Ukraine, President Joe Biden continued his calls for Russian President Vladimir Putin to de-escalate the situation. Russia has an estimated 100,000 troops near Ukraine's border and has been performing military drills during the past several weeks.

"Those forces on high alert are part of a NATO operation, not a sole U.S. operation. And I've made it clear to President Putin and we would, that we have a sacred obligation, Article Five obligation to our NATO allies and that if in fact, he continued to build up and or was to move, we would be reinforcing those troops," Biden said. "And I've spoken with every one of our NATO allies virtually. And we're all on the same page. We've got to make it clear that there's no reason for anyone, any member of NATO to worry whether or not NATO would come to their defense."

On Monday, the president shared this tweet, writing: "Today, I spoke with European leaders in response to Russia's military buildup on Ukraine's borders. We discussed our joint efforts to deter further Russian aggression, such as preparations to impose severe economic costs on Russia and reinforce security on the eastern flank."

While Ukrainian officials acknowledged the threat, they do not believe an invasion is imminent.

Tuesday, the Pentagon declined to offer specifics on which troops could be sent or where they could be sent and noted the notification process was ongoing. The public information officer for Fort Bragg said they could not comment on whether troops from the post would be included in the deployment.
,

"The president has made a commitment to support and defend and help Ukraine. So, when the president of the United States says something, that is his word and his bond, and he represents the United States. So, when he opens his mouth, we should listen and follow his instructions," said Benjamin Washington, who served in the military for more than two decades, including multiple tours overseas.

Washington, part of VFW Post 6018 in Fayetteville, said members have been following the current events.

"You never can tell when a conflict may break out anywhere. Now if we have commitments that say we'll do this and that, then honor those commitments," said Washington.

Washington, who worked in military intelligence for the bulk of his service, shared that leaders were taking a number of factors into consideration when assessing the situation.

"What are your allies doing? What do your agreements say? You've got phone calls going back and forth each day. You've got teletype, you've got e-mails going back and forth. Everybody talking about what we're going to do, how we're going to do it. What's your responsibility. And those all take consideration, all kind of intel being assessed and so forth, and then you brief the president. And once you brief the president and he makes a decision, you go with it," Washington said.

"I have called on the president to show strength and deter Russian aggression. Russia and the world must know the U.S. will never waiver on our commitment to our NATO allies and our friends.

The simple truth is that when politicians fail, the men and women of our military are often called on to clean up the mess. To be clear, I do not support sending US troops into Ukraine. However, Renee and I are praying for our troops and their families as many from our community are placed on high alert to deploy to the region."