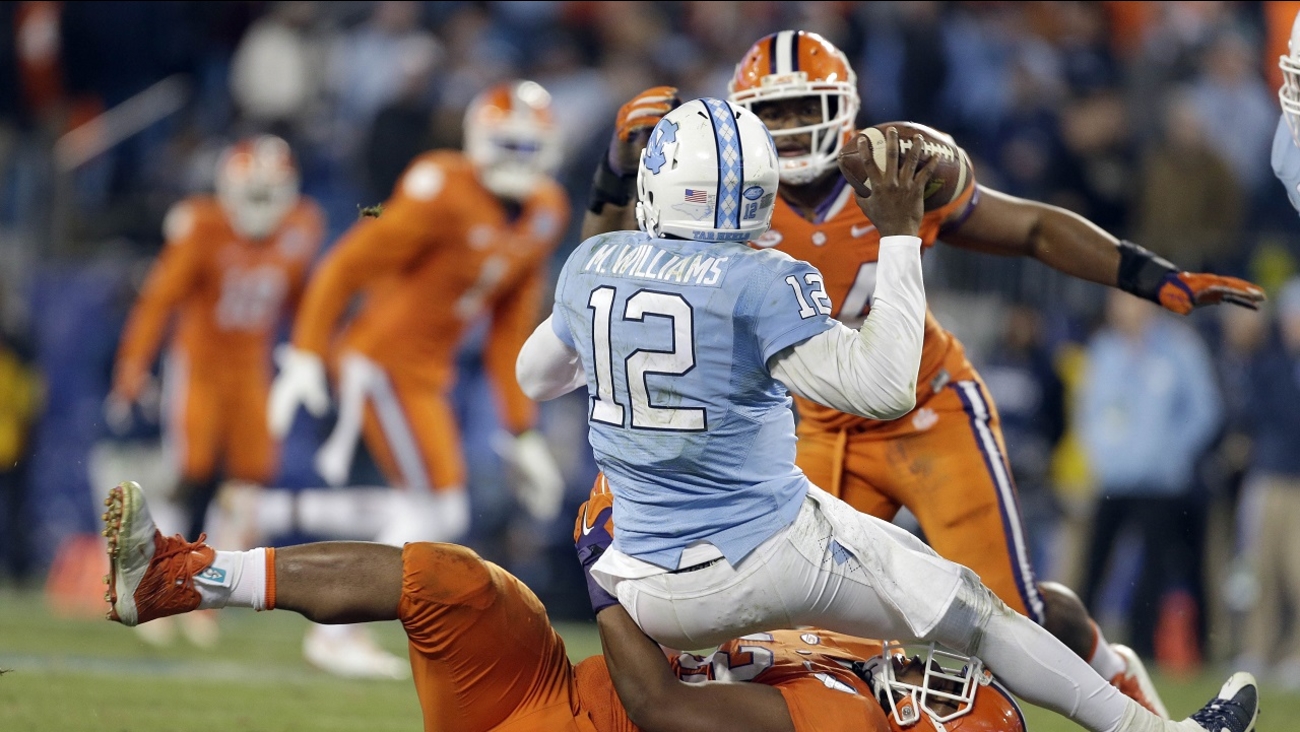 CHARLOTTE, N.C. (WTVD) -- Clemson is the ACC Champion - crowned after a 45-37 win over North Carolina that didn't seem as close as the final score, until some late game onside kick drama. More on that in a bit.

The fun story to tell would've been one of redemption and victory for Marquise Williams. The hometown kid, who grew up creating himself on video games as Carolina's QB, celebrating his greatest triumph and kickstarting a new era of championship football at North Carolina.

That would've been the fun story. The real story was unfortunately less magical. Quise struggled mightily for most of this night, save for a furious 4th quarter comeback attempt. He was harried by the Clemson defensive line into all sorts of misses, throws downfield that would normally be routine. The silver lining at halftime was to say that 66% of his completions went for TDs. The raw numbers: 3-12 for 50 yards were much more indicative.

Still, despite Williams' struggles, the Heels were right in this game, down 21-16 at half. The defense had stood mostly strong, surrendering one long TD march that was a 12 play testament to the running brilliance of Deshaun Watson.

#UNCFB trails at halftime for just the second time in 2015 as Clemson leads 21-16 after 30 minutes. pic.twitter.com/amZwIFHvVk

Carolina opened the third quarter with promise, hitting two runs from Williams and Hood before Mack Hollins hauled in a 25 yard pass to get the Heels into the red zone. The very next play though skewed disastrous, courtesy of a tipped ball INT by Cordrea Tankersley. Counting the South Carolina game, Williams 4th red zone INT in 2 games at Bank of America.

What followed was another clinic by Watson, the deserved ACC Player of the Year. He completed at one point his 12th straight pass enroute to Wayne Gallman punching in a one yard TD. 97 yards of shinkicking the Heels made it 28-16. After another ineffective UNC possession ended in a failed punt fake, Watson wasted no time hitting Artavis Scott to make it 35-16 and the lights looked to be out on the Tar Heels title hopes.

WHAT?! An unbelievable catch by #3, Artavis Scott and #Clemson leads it 34-16. Touchdown Tigers!!!

To the Tar Heels credit, they never folded. Williams scored late in the third on a naked bootleg, then Elijah Hood swept right to cut the deficit to 42-30. After a key defensive stop, UNC was driving to make it a one score game midway through the 4th quarter. Clemson again seemed to douse any hope with a strip sack and fumble recovery.

Still though, the Heels wouldn't die. A quick strike TD from Quise to Switzer cut it to 45-37.

The subsequent onside kick will go down in UNC infamy. Carolina recovered, but was called offside, a call that replay didn't seem to support. The re-kick was also an adventure, but Clemson found the ball and killed the final few seconds to sew up the title.

So no storybook hometown ending for Quise. He would've needed near perfection to outduel Watson and Tiger running back Wayne Gallman and on this night, he never really looked up to the task. The silver lining - UNC still has a chance at 12 wins. The title would've been nice, but a chance at more school history will have to suffice.

Calling it a night. pic.twitter.com/fVEXL0f9jt