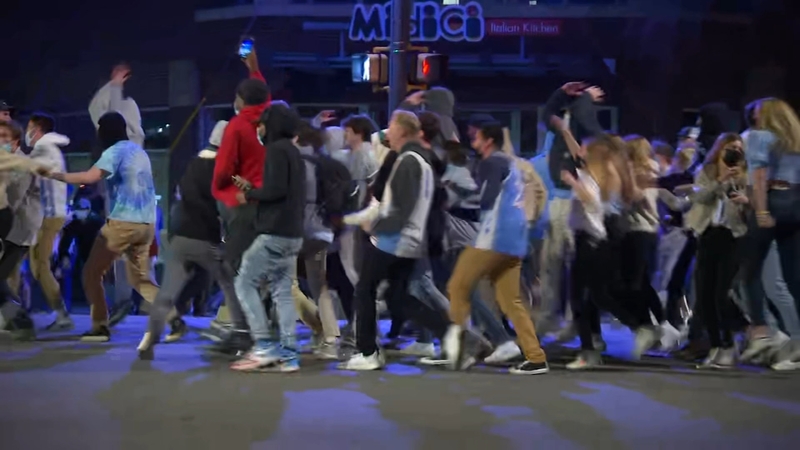 This time law enforcement officers were ready. They continued to allow traffic to flow and restricted revelers to the sidewalks.

To be honest it really just feels like a big game of four corners 😂 pic.twitter.com/iNKuoVTOZa

By 9 p.m., roughly an hour after the game ended, the crowd had dispersed. In prior years, the celebration would have lasted well into the night.

It's unclear if the people who rushed Franklin Street and gathered on the sidewalks will face any repercussions from the university or law enforcement.

Rushing Franklin Street is a tradition at UNC after the men's basketball team defeats Duke. However, with the COVID-19 pandemic ongoing, the tradition brought heavy criticism earlier in the season; that's why officials said they would not allow it a second time.

The UNC Tar Heels beat the Duke Blue Devils 91-73 to complete a regular season sweep of their archrival.

According to ESPN Insider John Gasaway that loss likely means Duke must win the ACC Tournament to make the NCAA Tournament.

If the Blue Devils fail to make the NCAA Tournament, it would be the first time since 1995--a season where Coach Mike Krzyzewski stepped away from coaching due to an injury.

The Blue Devils finished the regular season without a winning record for the first time since 1994-95--the season where Coach Mike Krzyzewski was absent from the bench due to an injury.

Duke has made 24 consecutive NCAA tournament appearances, the second-longest active streak of its kind, but will likely have to win five games in as many days at the ACC tourney to earn a berth this year. The Blue Devils' longest win streak this season is four.

"We appreciate that the overwhelming majority of our students did the right thing tonight and celebrated safely. We're disappointed in those who did not heed the warnings not to rush Franklin Street and will follow our disciplinary process for any reports we receive of violations of our Covid-19 community standards."

Game recap
Armando Bacot, Kerwin Walton and Caleb Love scored 18 points apiece and North Carolina never trailed it its 91-73 win over Duke on Saturday in the regular-season finale for both teams.

The Tar Heels will be the No. 6 seed and earned a first-round bye in next week's conference tournament. Tenth-seeded seed Duke (11-11, 9-9) plays No. 15 seed Boston College in Tuesday's first round.

Bacot scored seven consecutive points to start a 22-4 run that made it 26-6 when he capped the spurt with a dunk midway through the first half.

Duke trimmed its deficit to 13 when Wendell Moore Jr. hit a jumper early in the second half by Walton answered with a 3 and the Blue Devils got no closer.