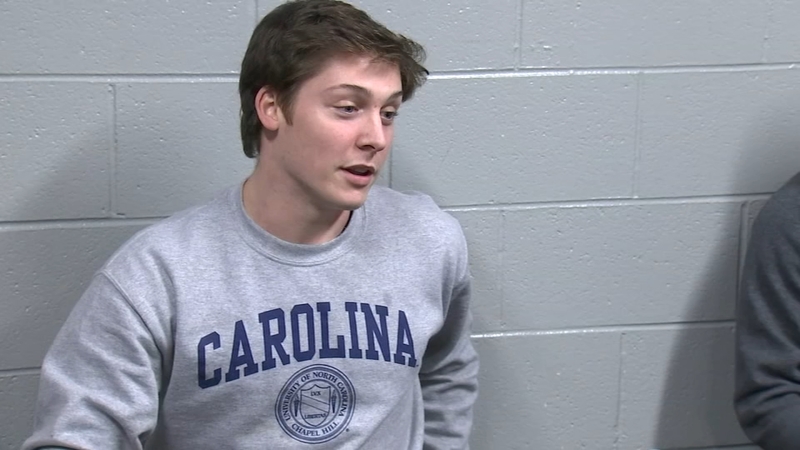 CHAPEL HILL, N.C. (WTVD) -- Earlier this week, UNC-Chapel Hill sophomore Will Douthit woke up to some shocking news: His car had been stolen from the parking lot of his house in Chapel Hill.

"With that was my hockey gear," Douthit said.

Douthit said he and some friends, whose cars were also gone, called the police the next morning and filed a police report.

Douthit is the goalie for UNC's cub hockey team, -- the only -- goalie. Because all his hockey equipment was gone, the Heels had to cancel their game against UNC-Charlotte scheduled for Friday and hope to be able to play the rivalry game against NC State on November 25 at PNC Arena.

Hockey gear is costly to replace.

"The hockey community understands that," Douthit said. "Goalie gear especially, it's an expensive investment. When the car went, it was kind of, well what are you going to do about the hockey gear? That's the day-to-day stuff that's really important. Sure a car is important right but the gear was the first thing that crossed my mind."

The team posted a GoFundMe page asking the community to help out in any way they could so Douthit could purchase new gear.

"I'm truly at a loss for words for that," Douthit said. "Just to see the support from my teammates, the community and the greater hockey community online. It's been ... I could've never really imagined it. I'm forever grateful."

"It spreads so quick," Douthit said. "It just goes to show how important hockey is becoming in this Carolina community, and how it can spread with the youth. I actually walked into the store today. and it was a goalie buying new skates with his mom and dad and they recognized me. On the way out, they gave me some money. It just warmed my heart that even these young kids are knowing about college hockey and of course professional hockey in the state of Carolina."

The coach was also similarly impressed.

"I was hearing from people I hadn't heard from in a long time," Volkman said. "People I played with, people from Canada, all over the world. Rival coaches were calling me, what can I do, how can I help out. I was very speechless."

As of Wednesday, his car had been found but the gear was gone. Police are working with Douthit to get his car back.