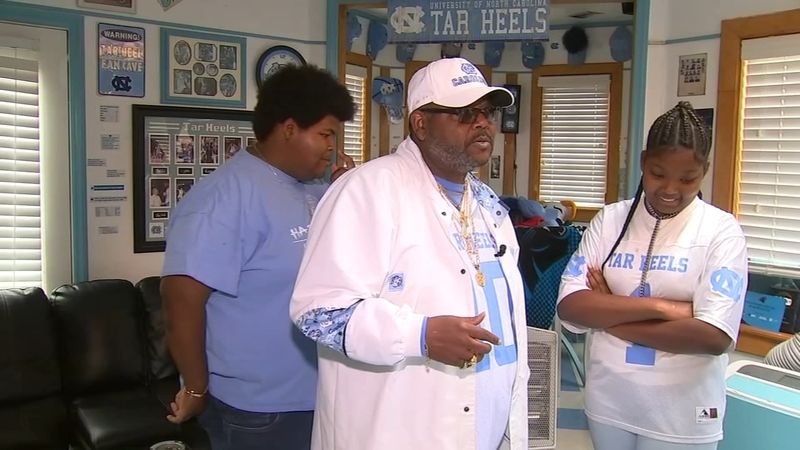 DURHAM, N.C. (WTVD) -- From head to toe, Dennis Garrett rides hard for UNC-Chapel-Hill. But his home in east Durham takes nostalgia to a new level.

"I like stuff that everybody wants, but not everybody can have. So everything in here is personal," said Garrett. "See, everybody talks about Michael Jordan but you got Eric Montrose, you got Vince Carter, you got James Worthy, you got Sam Perkins. I mean you got history. It ain't just basketball up in here. It's football. It's baseball. I'm a Carolina fan. I don't care if they swimming."

The love affair began growing up near campus in the 1970s.

"In our home, our dad had a certain area that he could go to that we were not allowed to bother him in. so when I got grown, I wanted to have the same area," Garrett said.

Now 60, Garrett is passing that Tar Heel pride down to his son and daughter.

"It's my dad, so I love it. Cause it's something that we all get to enjoy together," said Faye Garrett, his daughter.

For Dennis Garrett, Saturday's game against Duke is a full circle moment -- seeing North Carolina coach Hubert Davis, who in 1991 led the team to the Final Four as a player, now back in that rare air as the basketball team's first Black head coach.