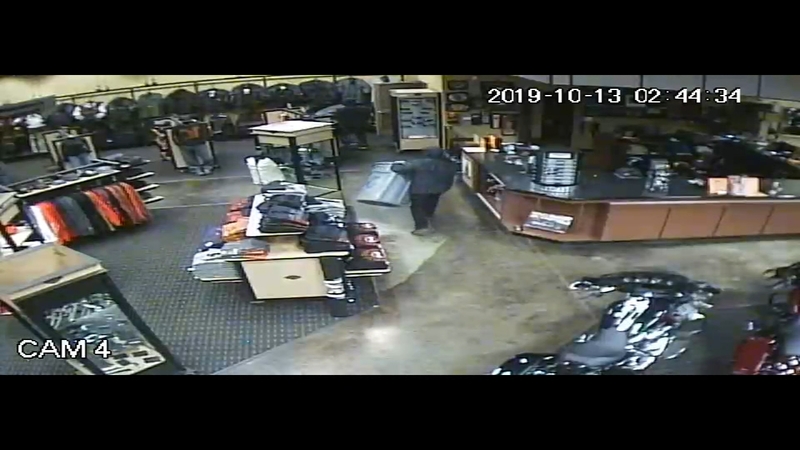 FRESNO, Calif. -- Two suspects broke into the Harley-Davidson store in Visalia, California, and stole thousands of dollars in merchandise in just minutes.

With a large crowbar in hand, they pried the front doors open. Both of them -- with their faces covered, gloves on and a trash can in hand -- immediately made a mad dash for the apparel section.

"They went strictly for leather jackets and basically took every men's leather jacket we had except for one," said general manager, Geoff Allan.

They pulled expensive leather goods off the rack and stuffed them into their cans, and once they were filled to the brim they drag them out of the store.

In minutes Allan says they stole $13,000 worth of merchandise.

"It's tough. It is tough to lose something like that and see stuff just go out the doors," he said.

This theft took place early Sunday around 2:30 a.m. but Allan says it's the fourth since he's been in charge.
Allan believes their location might have something to do with it.

"Unfortunately, it is good for us in terms of it being near the highway, but it is a little bit secluded out here where we are at," he said.

Each time a theft happens Allan gets proactive and upgrades security. This time is no different.

"We'll work on security, our front door has been a soft target several times now, so we will basically be putting a gate up on the front door," he said.
At this point, authorities are still trying to learn more about the thieves. Allan says detectives tried to dust for prints, but the suspects wore gloves.

Although Allan can't deliver the suspects to justice he can deliver them a message.

"I hope they find you and put you away for whatever time you get for stealing $13,000 worth of stuff," he said.