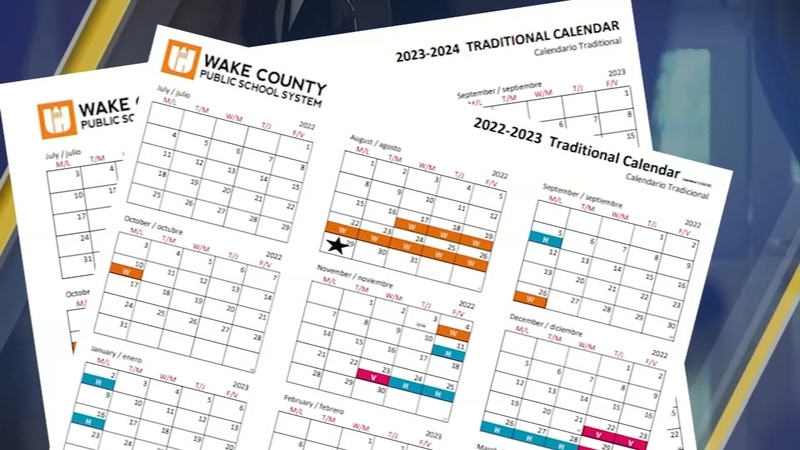 RALEIGH, N.C. (WTVD) -- Parents and elected leaders are urging the Wake County Public School system to observe Diwali, one of the most widely celebrated holidays in the world.

"This area has good schools. Good population of Indian-Americans and people observe their culture here," said Vishal Ghadia, who moved with his family from Florida to Cary, and has two children in third and fifth grade respectively.

Thus far, Ghadia has been pleased with the quality of education they're receiving, but doesn't agree with Wake County Public School System's schedule, which does not recognize Diwali.

"We don't want our kids to remember Diwali as a burden of when they have to finish their work the next day or next few days. We want them to celebrate it, enjoy the day, and remember we had this cultural gathering, religious gathering, and we want them to remember it that way," said Ghadia.

Diwali is a five-day festival observed by more than a billion people globally.

"It's a celebration in the Hindu religion of light over darkness, good over evil. So it's such a positive message for not only our Indian-American community, but all of North Carolina. So as a leader in Morrisville, with 55% of our population being Indian-American, I see how important it is for our community," added Morrisville Council Member Steve Rao, who has one child who is currently a WCPSS student.

There are no classes scheduled for holidays like Christmas and Good Friday, as well as the Jewish New Year of Rosh Hashanah and Muslim holiday Eid. For Diwali, students can take an excused absence, but are expected to make up any work they miss.

Their push recently received support from Rajan Zed, President of the Universal Society of Hinduism, who sent out a statement calling on the district to give the day off, writing in part, "that holiday on Diwali in Raleigh schools would be a step in the positive direction in view of the reported presence of a substantial number of Hindu students; as it was important to meet the religious and spiritual needs of Hindu pupils."

Ghadia and Rao both credited the school district for being receptive to their point-of-view, and invited them to join the scheduling committee to voice their opinions for future calendars; Ghadia said they would request one day off to observe Diwali.

"The needs of a community change as the demographics change," Rao explained.

Those changing needs have already been reflected in WCPSS's schedules, which scheduled a teacher work day for Holi.

"It took a lot of work and a lot of people rolling up the sleeves. But that day when we had off, it was just so nice to have festivals of color, not worrying about missing school, and knowing that the county school system had listened to us and made it happen," who credited school leaders and state senator Jay Chaudhuri for their work in advocating for the day off.

In a statement to ABC 11, a Wake County Public School System spokesperson discussed holiday scheduling requests in reference to Diwali:

Each year, the calendar committee discusses many options that allow the school district to honor community requests while maintaining instructional integrity and adherence to state law.

Draft calendars are created by a committee that includes parents, teachers, and representatives from community organizations. Committee members spend hours discussing and creating a draft that meets the needs of schools, teachers, and students while also considering the needs of families and the community.

Unfortunately, we are not able to honor all requests. First and foremost, we must ensure that an instructional calendar supports learning and teaching and adheres to state law.