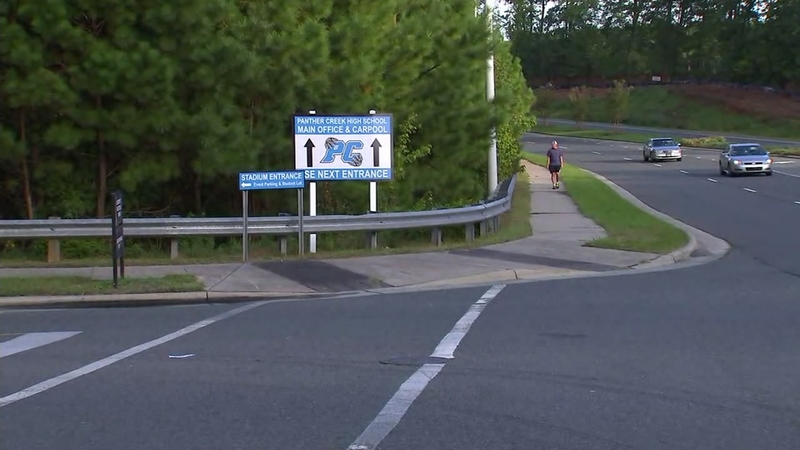 CARY, N.C. (WTVD) -- One week after students and parents at Cary's Panther Creek High School started signing a petition to improve safety at a busy intersection at the school, the principal is calling a meeting with traffic engineers.

Students and parents at Panther Creek High School want an officer directing traffic at this intersection leading to the student parking lot. @WCPSS says principal has called a meeting with police, traffic engineers for this week. #ABC11 pic.twitter.com/y5TpDXmz5A

Members of the Cary Police Deptartment, NCDOT, and administrators are scheduled to meet this week and discuss what can be done to change the flow of traffic at the student entrance off of McCrimmon Pkwy.

Nearly 900 people have signed a petition, complaining the lack of an officer to direct traffic leads to inexperienced student drivers making risky judgement calls from the left turn lane, darting across traffic to avoid being late for class.

Lisa Luten, spokesperson for Wake County Public Schools, told ABC11 that Panther Creek has placed a security guard at the corner of the intersection in the mornings, but that person is not a uniformed officer and is, therefore, unable to direct traffic.

Kris Cuddy's daughter is a senior at Panther Creek. As one of 500 students who have a parking permit to drive to school, she has seen her fair share of close calls.

"Somebody slammed on their brakes, they're trying to floor it," Cuddy said.

But as the petition stated, "We should not wait until something tragic happens to one of our peers to act."