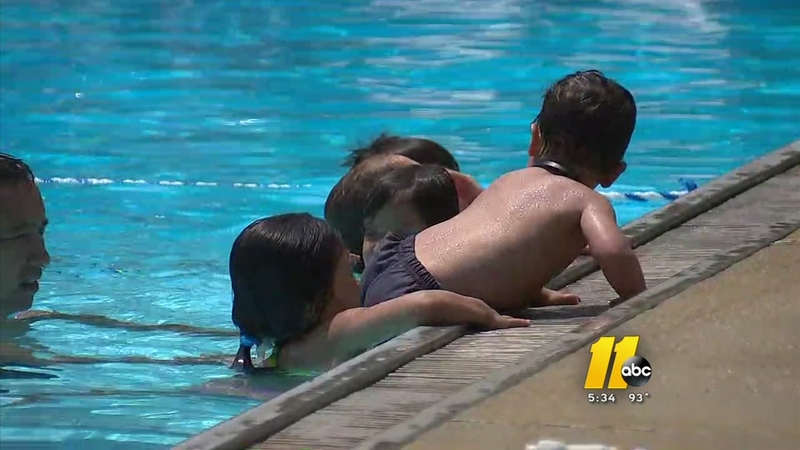 Working as an emergency physician at WakeMed, Dr. Graham Snyder has seen a lot of close-calls, a lot of death, and comforted a lot of grieving families over the years.

"One of the most personally painful things to me is talking to parents when they've lost a child from drowning," said Dr. Snyder.

One case about a young girl who drowned while swimming in a backyard pool during a family reunion stood out to him.

"Everyone was doing everything right and she just slipped under and nobody saw it," he said. "They thought she was just holding her breath and when they pulled her up, they had lost her."

It was then that Snyder decided to invent a device that could potentially save a life and spare a family from what he calls a preventable tragedy.

He created the SEAL SwimSafe, a necklace-like band that goes around a child's neck. Several times a second, as they're swimming, the band sends 'all is well' signals to a hub that Mom or Dad would keep next to their pool chair or a lifeguard would attach to their stand.

Snyder said the FCC-certified wearable technology uses a much lower frequency and power than your cell phone but can reach the distance of a football field and surrounding area.

When the child goes under water, the SwimSafe times them. If the child stays under water longer than the threshold of pain, a strobe light and siren fire from the band and a loud, unmistakable alarm sounds from the hub.

Snyder said he set the threshold of pain window to where kids can't go under the water and set it off just for fun, but it's enough time to where an adult can still rescue them.

The second generation of the device is being built and Snyder's team is working on a price structure.

He hopes by the end of the year, to send it out to municipalities and YMCA's in target markets before sending it nationwide.

"Technology is not a substitute for vigilant parents," Snyder said of his invention. "The most important thing is we teach our children to swim, teach them early and then watch them vigilantly and be ready to rescue. This technology is to prevent the human error, the fact that we're not perfect no matter how much we love our children, sometimes we will miss something and this is for that opportunity."
Report a correction or typo
Related topics:
hobbies & interestssafetydrowningswimming
Copyright © 2022 WTVD-TV. All Rights Reserved.
TOP STORIES
Icy roads a morning threat as temperatures dip into the 20s overnight
Monthly tax credits end, leaving some NC families forced to make cuts
Omicron surge hasn't peaked nationwide: US surgeon general
Triangle Restaurant Week returns to highlight local small businesses
Deputies investigate shooting at Harnett County home
Jewish community strives to 'stay strong' after Texas synagogue terror
LATEST: Long lines for COVID testing -- is it worth the wait? Maybe
Show More
Dozens of RDU flights canceled through Monday evening
Free virtual class on Martin Luther King, Jr. may surprise you
Already delayed, North Carolina primary could be moved to June
Woman killed after being pushed in front of NYC subway train
Man arrested, charged with Christmas Day murder in Edgecombe County
More TOP STORIES News