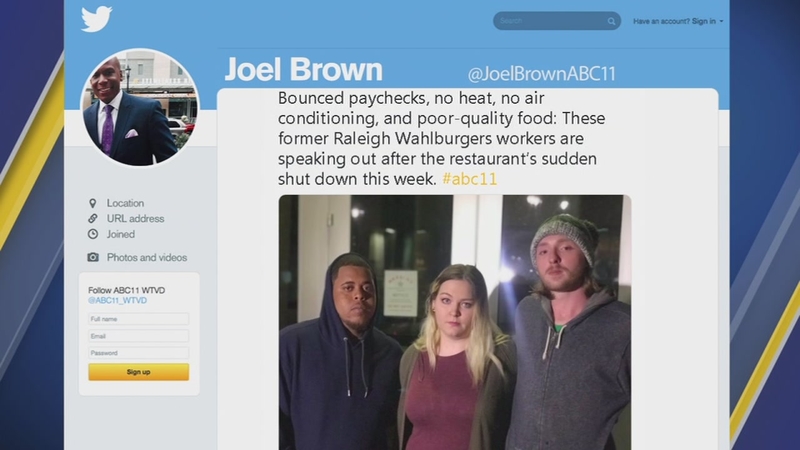 RALEIGH (WTVD) -- The sheriff's posting on the front door of the downtown Raleigh Wahlburgers is the kind of notice tenants see when the rent is not being paid. Indeed, Wahlburgers has been evicted.

But it's not just burger-craving customers left out in the cold. The people who worked there are saying the shutdown comes as a complete surprise.

The now-former workers have a long list of grievances that may end up in court.

Bounced paychecks, no heat, no air conditioning, and poor-quality food: These former Raleigh Wahlburgers workers are speaking out after the restaurant’s sudden shut down this week. #abc11 pic.twitter.com/UfrPZSHmqL

Jackson Wright was the head of food prep. Katy Nester tended the bar and her fiancé, Luke Anders, was a line cook. With no warning, all three are now unemployed.

"We found out last night when we saw your (ABC11's) article," Nester said.

They all told the same story of a restaurant besieged by mismanagement: No training for staff, no heat or air conditioning, and a payroll in disarray.

"I couldn't provide anything for my family for Christmas or celebrate the way I wanted to because they took away my way of making a livelihood," Nester said.

The November inspection report from Wake County Health Department confirmed the workers claims that the Wahlburgers facility on Fayetteville Street had no working hot water.

Anders told us that despite rumors that the business was in financial trouble, management had assured employees for weeks that their jobs were safe.

"Our general manager or acting manager on site were assuring us that there's no way we're gonna close, this place is too much of a money-maker. But here we are," he said.

It was a different story back in May at the Wahlburgers grand opening. The burger joint backed publicly by celebrities Mark and Donnie Wahlberg and made more popular by a TV reality series was eagerly anticipated.

But according to his workers, the franchise owned by Greg Pranzo, operating under the name Carolina Burger Company, struggled from the start. The restaurant was getting bad online reviews about the food and cleanliness and vendors who weren't getting paid. Some workers even said the store started buying food from Sam's Club.

"This didn't start happening to me until October," Wright said. "But there's other people having check problems since the beginning, like bounced checks, shaved hours."

Anders added, "We're just left with pieces of paper that promise us money and yet our money gets bounced."

ABC11 reached out several times to franchisee Greg Pranzo Friday. We did not hear back.

Wahlburgers Corporate sent us the following statement regarding the incident: