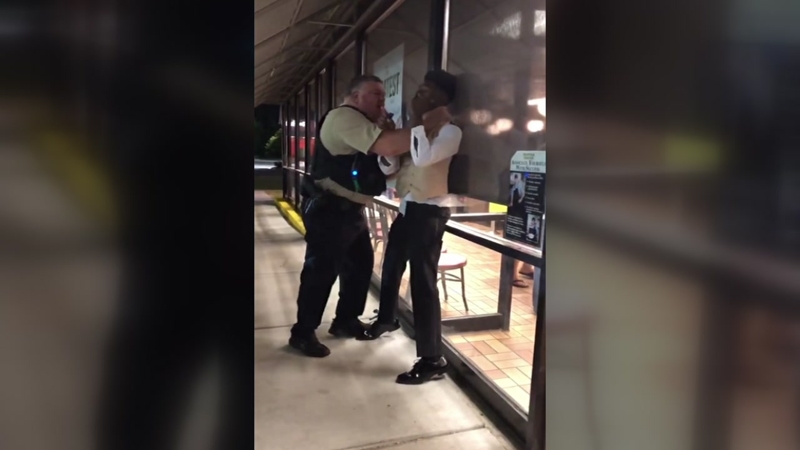 WARSAW, NC -- The NAACP Legal Defense Fund has responded to a viral video showing a Warsaw officer putting a man in a chokehold outside a Waffle House, calling the actions of the officer "grossly inappropriate."

The NAACP LDF also called on the Warsaw Police Department and District Attorney to conduct a thorough and transparent investigation of the officer's conduct by publicly releasing any body-worn and/or surveillance camera footage, as well as audio of the call for police service.

The incident happened on Saturday after a high school prom.

Anthony Wall, 22, had just taken his 16-year-old sister to prom and went to grab a bite to eat when he said he got into an argument with several wait staff members.

From there, police were called to remove Wall, which led to him being choked, slammed and led away in handcuffs.

A video went viral of a Warsaw police officer putting a man in a chokehold.

"I was pretty much trying to scream for air and trying to breathe because he was holding my throat and that's when I got aggressive with him because you are choking me," Wall told ABC11.

He was charged with resisting arrest and disorderly conduct for the argument inside the Waffle House.

While he takes full responsibility for his interaction with Waffle House employees, he told ABC11 the cop's actions were not justified.
"Your hands should have never been around my neck like that if my hands were in the air," said Wall.

The video, which was posted to Facebook, has been viewed thousands of times.

Wall told ABC11 he only wanted to raise awareness.

Read the full statement from the NAACP LDF here.