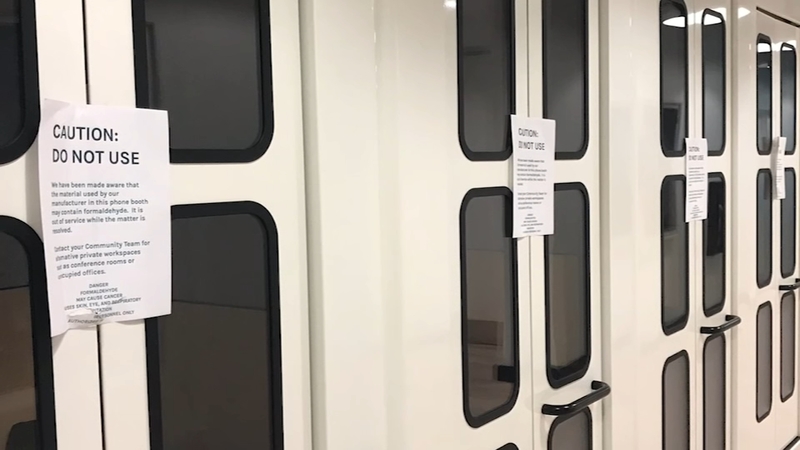 RALEIGH, N.C. (WTVD) -- Members of a popular coworking startup with a location in downtown Raleigh are expressing concerns for their health after the company revealed potentially elevated levels of a cancer-causing chemical were detected inside its phone booths.

More than a week after WeWork reported it was taking 2,300 of its phone booths out of service, ABC11 received photos showing phone booths were still present inside Raleigh's One Glenwood location, with signs taped to the doors, warning members not to use them.

Formaldehyde is known to be a human carcinogen, according to the 14th edition of the Report on Carcinogens, put out by the National Toxicology Program, which is headquartered at the National Institute of Environmental Health Sciences in Research Triangle Park.

Formaldehyde is a colorless, flammable gas at room temperature and has a strong odor, according to the Environmental Protection Agency.

According to the EPA, formaldehyde is commonly used in wood construction and manufacturing but exposure to elevated levels can cause eye, skin, nose and throat irritation, with high levels of exposure potentially causing some types of cancer.

A member who leases office space inside WeWork at One Glenwood said for months prior to the company taking the phone booths offline, he spent several hours a week making calls inside the phone booths and had experienced eye irritation and nausea on multiple occasions. He said he could also smell a strong odor.

That member told ABC11 that fellow members who are also renting office space in the building are referring to the phone booths as "cancer closets."

The signs, now taped outside the phone booths read:

"CAUTION: DO NOT USE

We have been made aware that the material used by our manufacturer in this phone booth may contain formaldehyde. It is out of service while the matter is resolved. Contact your Community Team for alternative private workspaces such as conference rooms or unoccupied offices.

FORMALDEHYDE MAY CAUSE CANCER
CAUSES SKIN, EYE, AND RESPIRATORY IRRITATION

In email correspondence obtained by ABC11 this week, WeWork staff at Raleigh's One Glenwood location told a concerned member that removal of the phone booths would take place during the next few days; the process was delayed because a sprinkler system needing to be disconnected before removal. Staff said the work to remove the booths would take place after business hours to minimize disruption to members.

The company confirmed to ABC11 that phone booths at the One Glenwood location were taken out of service last week and are "being removed from the location shortly."

The company did not confirm a specific timeline for the removal or the exact number of phone booths inside the One Glenwood location.

All of this comes as WeWork has dealt with a series of issues at the corporate level.