Affordable Care Act on line at Supreme Court, but is it likely to fall? 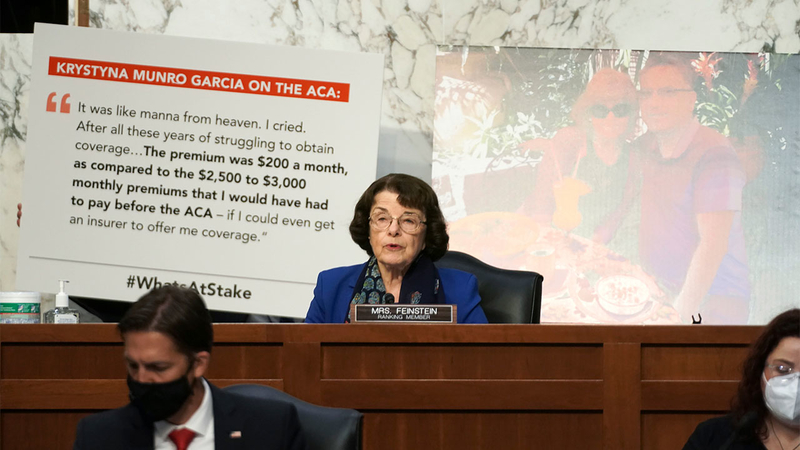 WASHINGTON -- To hear Democrats tell it, a Supreme Court with President Donald Trump's nominee Amy Coney Barrett could quickly get rid of the law that gives more than 20 million Americans health insurance coverage.

But that's not the inevitable outcome of a challenge the court will hear Nov. 10, just one week after the election.

Yes, the Trump administration is asking the high court to throw out the Obama-era healthcare law, and if she is confirmed quickly Barrett could be on the Supreme Court when the court hears the case.

But even if the justices agree that the law's mandate to buy health insurance is unconstitutional because Congress repealed the penalties for not complying, they could still leave the rest of the law alone. That would be consistent with other rulings in which the court excised a problematic provision from a law that was otherwise allowed to remain in force.

Barrett told senators that she is "forever grateful" for Ruth Bader Ginsburg's trailblazing path as a woman on the court.

Democratic lawmakers, however, sounded alarm bells Monday, the start of four days of hearings before the Senate Judiciary Committee for Barrett.

The party's vice presidential nominee, Sen. Kamala Harris, who sits on the committee, said Republicans are "trying to get a justice onto the Court in time to ensure they can strip away the protections of the Affordable Care Act."

"If they succeed, it will result in millions of people losing access to health care at the worst possible time: in the middle of a pandemic," the California senator said.

Sen. Dianne Feinstein, California's other senator and the committee's senior Democrat, said, "Health care coverage for millions of Americans is at stake with this nomination." And Sen. Sheldon Whitehouse of Rhode Island called Barrett's nomination a "judicial torpedo aimed" at Affordable Care Act protections, including for preexisting health conditions. Other Democrats on the panel made similar points.

With the nomination process of Judge Amy Coney Barrett underway, here's what to expect in the coming weeks.

After that 5-4 ruling, which split the court along ideological lines, the justices rejected a second major challenge to the healthcare law by a vote of 6-3 in 2015.

The case before the court this year stems from Congress' decision in 2017 to eliminate the law's unpopular fines for not having health insurance. Despite repealing the fines, lawmakers left in place the law's requirement that virtually all Americans have coverage. Texas and other conservative-led states argue that the change makes the requirement unconstitutional and also dooms the rest of the law because the mandate was so central to it.

But the court could simply "sever" the mandate from the law and leave the rest of the law alone. Many observers see that as a likely outcome and note the upheaval that would result across the American healthcare system if the law were to be struck down in its entirety.

Before the Supreme Court's term began in October, Paul Clement, who argued in the 2012 Affordable Care Act case, said he wasn't sure that the addition of a new justice would change the outcome of the case. He suggested that it is unlikely that the whole statute will fall.

"I think the challengers have a very uphill battle" in arguing that the ACA should be struck down in its entirety, he said during a virtual event organized by Georgetown's law school.

Another participant in that event, Roman Martinez, agreed. He said he thought it could be a case that surprises some people in that the justices might be able to resolve it in a broad agreement, rather than along partisan lines.

The case could also be rendered virtually meaningless if a new Congress were to restore a modest penalty for not buying health insurance, though that seems unlikely to happen.

One other key observer of the case suggested the Affordable Care Act would likely stand. Earlier this year, Virginia's William & Mary law school held a mock argument in the case. While the individual votes were not made public, no one on the eight-person panel - which included judges, law professors and a journalist - voted to strike down the entire law.