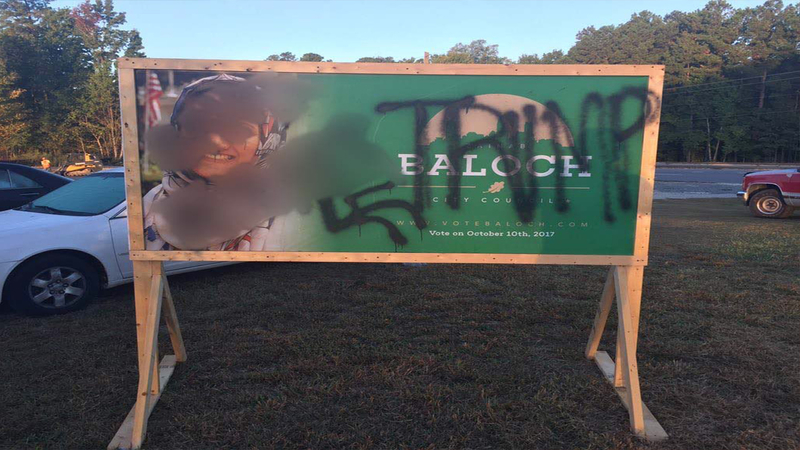 RALEIGH (WTVD) -- A racial slur, a swastika sign, and the word "Trump" were spray painted on a sign for a 26-year-old Muslim woman running for the Raleigh City Council.


Zainab Baloch is one of the seven candidates running for two at-large seats on Raleigh's council.

"The vulgar language that was used was very traumatizing; it was hurtful," she said. "(I was) very disheartened at the hateful rhetoric that was on our camping sign. I will say that when I filed for City Council, I was very well aware that I was putting myself out in the limelight and I could be the target of some hateful attacks."

“The vulgar language that was used was traumatizing.” Muslim City Council candidate speaking out after racial slurs sprayed on sign. #ABC11 pic.twitter.com/GJhDXBLnYz

Baloch said some of her fellow candidates have reached out and offered support.

"It is so important to have diverse voices in government that are representing all people," she added.

The discovery was made by a construction crew Friday morning at 5520 Louisburg Road, where a mosque and Muslim youth community center is being built.

Her mother, Sabina Tareen, met ABC11 at the site and said the findings are disturbing.

"She is an American," Tareen said. "She is born and raised here, and she cares about her community, but this very disturbing."

The Council on American-Islamic Relations, the nation's largest Muslim civil rights and advocacy organization, spoke out against the "hateful" vandalism.

"This type of hate incident seeks to prevent positive civic engagement by all our nation's citizens, thereby undermining the very foundation of democracy," said CAIR National Communications Director Ibrahim Hooper. "Americans across the political spectrum must condemn this hate-filled act of intimidation."

"The Muslim American Public Affairs Council condemns in the strongest term this act of vandalism against the Raleigh City Council at-large candidate Zainab Balouch. While this cowardly act is not indicative of the Raleigh community as a whole, we consider it a frontal assault on our democratic values, political process, and the constitutional rights of all Americans. To preserve our peaceful and tolerant tradition and solidarity, we ask all community leaders, religious and non-religious institutions, law enforcement, and politicians to join MAPAC in condemning this type of hate crime."
Report a correction or typo
Related topics:
politicsraleighcrimereligionmuslimsracismpoliticsraleigh news
Copyright © 2022 WTVD-TV. All Rights Reserved.
TOP STORIES
2-year-old shot while sitting in car with mother
New law protects you from surprise medical bills
LATEST: Is it worth waiting in long line to get COVID-19 test?
Airlines ask Biden administration for 'immediate intervention' on 5G
Family of man killed on I-440 holds press conference
Omicron surge hasn't peaked nationwide: US surgeon general
Patio igloos installed at Cary restaurant
Show More
Cold case team shines new light on betrayal of Anne Frank
Monthly tax credits end, force some NC families to make cuts
Icy roads a morning threat as temperatures dip into the 20s overnight
Triangle Restaurant Week returns to highlight local small businesses
Deputies investigate shooting at Harnett County home
More TOP STORIES News