WTVD
By Andrea Blanford
DURHAM, N.C. (WTVD) -- Long before the deaths of George Floyd, Ahmaud Arbery and Breonna Taylor, the work was underway to build multiethnic unity within churches that might withstand moments of tragedy and through integrated community grounded in faith, be a catalyst for systemic change and healing racial divisions.

It was after a visit to the Brooklyn Tabernacle in 2005 that senior pastor of The Summit Church and current president of the Southern Baptist Convention J.D. Greear said he felt called by God to have his church be one where people of all ethnicities not only gather to hear sermons but live out their lives together.

"Dr. (Martin Luther) King used to say that the most segregated hour in America was between 11 and 12 on Sundays," Greear said. "With all due respect for him, we might even add there's one more segregated hour, though, and that's between 6 and 7 every night around the dinner table."

The Summit Church, based in Durham, draws about 12,000 attendees on the weekend, spread across 12 campuses in the Triangle, including its broadcast campus in north Raleigh

The Summit is made up of about 17% people of color, including 350 attendees at the church's Spanish campus locations, Summit en Español, and a Mandarin congregation that has an average of more than 50 people on the weekends.

One of the church's newest members and longtime friend of Greear's, Dr. Bryan Loritts, will be spearheading The Summit's initiatives to build diversity and ethnic unity. While the church had been in talks with Loritts over the last year to become the new Exec. Pastor for Teaching and Development, he just so happened to come on board in the days following George Floyd's death.

"I had a deeply visceral reaction," Loritts said of the video showing the killing of Floyd while in police custody. "In fact, we've had some deeply personal conversations in our own home."

"That's not an image we'll ever forget. One of my sons, he's now wrestling because of that, with matters of faith and is asking questions like 'Where is God?' It just seems like this has gone on for 400 years. And we've talked about that," said Loritts. "I've got another son of mine, my wife happens to be half Mexican, half Irish. So our kids are a little bit of everything. One of my sons just said the other day, 'Maybe I should marry a white woman because my kids maybe will look more white and they won't get treated that way.'"

Loritts, an African American, along with his wife, who he described as half Mexican and half Irish, are raising three teenaged sons. Driving lessons in the Loritts home, he said, have more to do with how to safely interact with white police officers than where to find the gas and the brake.

"We try to instill in them, wisdom without instilling in them bitterness or suspicion towards our white brothers and sisters," Loritts said. "And that's where I find the hope of the gospel to be really life-giving because one of the passages of Scripture says we wrestle not against flesh and blood. So the Christian perspective - white people are not the enemy, but we have to talk about these things."

AN "EXISTING MIRACLE" EVEN IN A TIME OF PANDEMIC

In lieu of traditional sermons this past weekend, which have all been exclusively streamed online since the beginning of the COVID-19 outbreak, The Summit shared a conversation on race between Greear, Loritts and Janetta Oni, Director of Communications for the church.

As Greear mentioned in that conversation, he's been encouraging the church to listen to their "brothers and sisters of color" and without rushing to solutions, and then to stand alongside them in fighting for justice.

"Especially here in the church, what it means to be a follower of Jesus is that we bear one another's burdens, which means we stand up against the injustices that are happening to our brothers and sisters as fervently as if it were happening to us or one of our children," Greear said.

Greear said during the pandemic, as all services were moved online, the number of people participating in weekend services has more than doubled.

He said he believes this months-long shift will forever change how The Summit does ministry, saying it's provided, even now, a chance to engage people who've been on the sidelines.

"I just heard from one of our leaders - a white family who has become friends with a black family who would never come to church, because in part of some of their strained relationships with the white community in past," Greear said. "But they're willing to go to their house on the weekend to watch the services and they sent me a message this morning it said, 'God is really working here. They've been able to hear the message. They would never come to our church, but they met with us on the weekend. It's been a real healing moment.'"

"We want to be an existing miracle that makes people say 'What is this power? What is this commonality that you find?'" Greear said. "And just let the makeup of our church body point them to the message that we think is the most important and most precious to us."

NOT A JUSTIN BIEBER CONCERT OR THE NBA ALL-STAR GAME

While Greear and Loritts yearn to build a diverse church body in the Triangle, they're emphatic that their mission is not to achieve a display of multicultural events that take place on the weekends.

"It's not a mystery, it's not a miracle when people of -- who all like the same kinds of music and look the same and vote the same direction, get together in a group," Greear said. "That happens at every Justin Bieber concert that takes place. What's a mystery is when people who have these reasons for division, cultural differences, backgrounds, experiences, when they find something greater in Christ that overcomes those divisions. We don't create unity by downplaying the divisions or trying to neutralize them all. You find unity by finding something that you are more unified on than the things that divide you."

Loritts, who said churches should represent the communities they're in, also said there are a lot of diverse churches that aren't experiencing unity; he likened it to the NBA All-Star Game where players from different teams come together to play in the event and when it's over, go back to their separate teams.

"That's not the kind of ethnic unity we want," Loritts said. "We want people from every walk of life who are really mutually submitting to one another, loving one another, and honestly that's nothing new. The first-century church -- that was our norm. In the first-century world, the only place you could really see substantive relationships that transgressed gender lines, class lines and ethnic lines was the church of Jesus Christ."

"WHILE GOVERNMENT CAN CHANGE LAWS, IT CAN'T CHANGE HEARTS."

Loritts said he believes the Civil Rights movement of the 1950s and 60s led by Dr. King, Jr. and other professing Christians brought about the most legislative change than other movements of the era.

"I believe the reason for that is both the approach: non-violence and where that approach came from, which is the word of God," Loritts said.

Loritts pointed to the current movement, which he said feels leaderless. He's calling on credible Christian leaders, not only African Americans, to rise up and take the lead and re-center the movement back into the church.

"African Americans today by and large still don't really occupy huge seats of systemic power and if we're going to see systemic change, we're gonna need our white brothers and sisters to really lock arms with us. And that's where I feel incredibly hopeful because I really do feel like the uniqueness of what we're seeing with George Floyd, as never before, I felt a surge of white advocacy and empathy as never before. We just have to leverage that to get our white brothers and sisters to lead with us," said Loritts.

In his role as president of the Southern Baptist Convention, in which slavery played a role in its 1845 founding, Greear said he has focused on getting leadership to reflect the diversity of the convention itself.

Just this week, the SBC's Executive Committee held a special meeting in which it elected its first African American chair, Rolland Slade.

Greear's message to the 48,000 churches of the SBC: Black lives matter.

"Hey, we've got to say that black lives matter," he said. "Now, I understand that we may not want to align ourselves with all the different agendas that come with an organization or a hashtag or a website, but at its core, that's a gospel message. Black lives matter because Jesus died for black lives just like he did for our lives and they are equal with us, they are one -- in one body in Christ."

Greear said the Christian message is uniquely shaped to create the deeply integrated gospel community that can sustain the church in moments of grief and in pursuing justice.

"The gospel gives you the ability to do that," he said. "We believe the reasons are one, it teaches a profound unity of humanity: there's one God that created us all, one problem -- sin, one solution -- Jesus's death, one hope -- the resurrection. So that gives us a unity that's greater than anything that divides us."

Loritts said racism is one of the faces of sin that all people are born into and believes that it will always be among us. However, he's hopeful for future generations, and with the power of the gospel, which he said changes peoples' hearts, the church will be well-equipped for what's to come.

"The Christian worldview is that we are fallen people marred by sin. We're born into this world, sinners. And so, unfortunately, because of that, one of the faces of sin is racism. So racism will always be among us," said Loritts. "But I would also say, I had someone ask me one time, 'Bryan, if you could live at any time in world history, when would it be?' I said, 'As a black man? Now.' Even though things aren't perfect for us and we've got a lot of change to make, the kind of change that we saw during Civil Rights movement, has been monumental because of what King did; the Voting Rights Act was passed, the Civil Rights Act was passed, the Fair Housing Act was passed."

"These are huge leaps forward, but we still have some ways to go," Loritts said. "So I like to say, I'm not necessarily laboring for my lifetime, I'm laboring for my kids. For a time I will not see."

"As my friend, Eric Mason says, 'Proximity breeds empathy,'" Loritts said. "So when I'm close to people who don't look like, act like, think like, or vote like me, that betters me and that betters them. I think at the end of the day, we just don't know each other. And when we don't know each other, we hide behind soundbites and stereotypes. And what the church can offer, the multiethnic church, is authentic unity that doesn't have a political agenda in the middle of it, but has the reconciling power of the Good News of Jesus Christ."
Report a correction or typo
Related topics:
religion & spiritualitydurhamncreligionchurchgeorge floydrace in americamlkdurham county news
Copyright © 2020 WTVD-TV. All Rights Reserved.
RELIGION 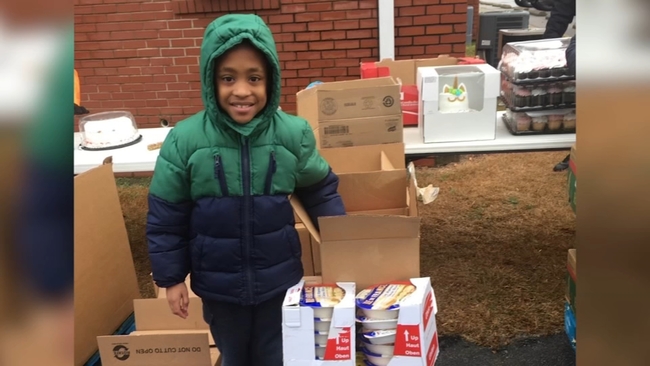 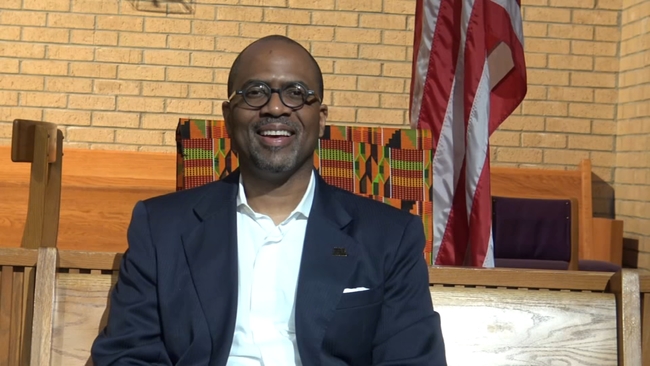 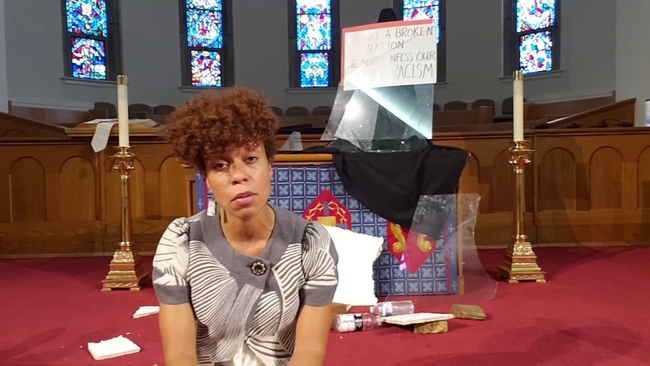