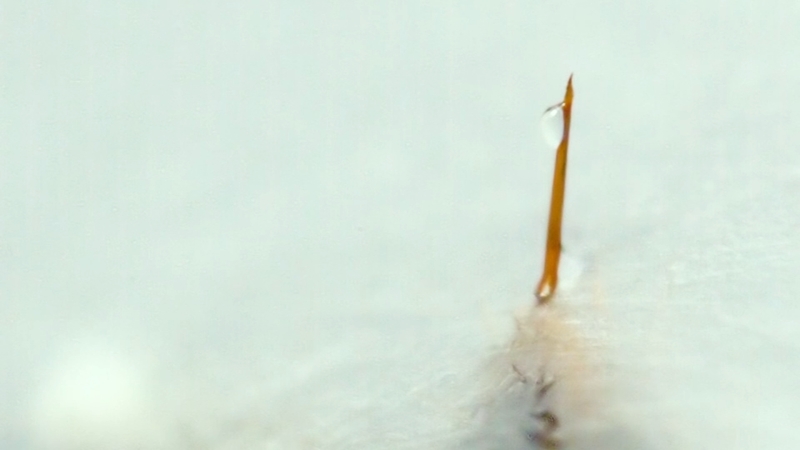 EMBED <>More Videos
RALEIGH (WTVD) -- A skin-crawling video is making the rounds on social media this week and it may make you think twice about getting near an ant hill.

Adrian Smith, the head of the Evolutionary Biology and Behavior Research Lab inside the NC Museum of Natural Sciences, created the video about a month ago but hadn't posted it until Monday.

Have you ever been stung by an ant? I made a video for you. I filmed something that’s never been filmed before (as far as I can tell).

This is what happens underneath your skin when an ant is stinging you!

"Thought I would film sort of what venom injection, what being stung by an ant looks like," said Smith.

Smith has been a researcher at the NCMNS lab for more than three years. He told ABC11 he came up with the project after noticing no one else had filmed something like that before.

"My job as a scientist, as someone who studies ants for a living, is to try to see things that have not been seen before," said Smith.

With the attention his project has been getting, Smith said many people are learning something new about the ant species.

"A lot of comments are, 'I didn't even know ants had stingers. I thought it was just a bite that hurts'. So ants do bite you, but they're just biting so they can hold on, so they can insert their stinger," said Smith.

In creating the video, Smith said it took around 30 takes, a camera with a macro lens and the video being shot at 1,000 frames per second.

One of the critters involved in the film is known as a Harvester Ant. Smith said this species is very prominent in the Sandhills region, including Fayetteville. These ants' venom, according to Smith, can pack quite the punch.

As a researcher, Smith said the video is all a part of the scientific process.

"Their societies do a lot of things that we do. So there's a lot to learn from ants that's relevant to humans," said Smith.

You can learn more about ants and other fascinating bugs at NCMNS' upcoming Bugfest that will make its way to Raleigh in September.