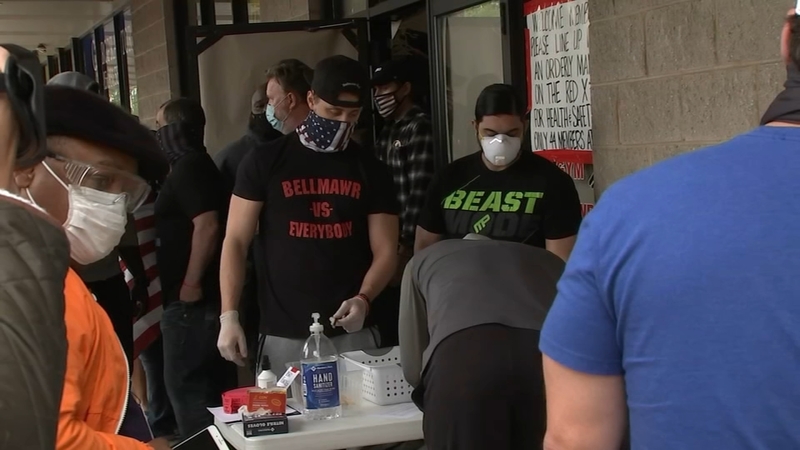 A collective cheer was heard as owners unlocked the doors at 8 a.m.

No new sign-ups for this day, only members were allowed inside at a limited capacity.

Members got their temperatures taken at the door and signed medical questionnaires and waivers before entering.

Co-owner Ian Smith told our sister station, 6abc in Philadelphia, "We're here, being civilly disobedient, being peaceful operating our business as we should be able to."

Members and supporters began showing up before sunrise, and the crowd grew.

Supporters gather outside of Atilis Gym prior to reopening

Bellmawr police blocked off the parking lot, but operations pressed on as supporters congregated outside.

"All small business is essential, and our constitutional rights are the most important thing that any American can uphold," Smith added.

The owners said they have taken precautions. Signs are posted outside telling people to adhere to social distancing. Capacity will be limited to 44 members at a time.

The owners took precautions inside as well, including taping off workout stations and spacing equipment. There are also bottles of disinfectant to wipe down the equipment.

"I felt safer in the gym today than I felt at Wawa, Walmart all of those places- supermarkets- they're policing us to stay 6 feet apart. They are requiring masks," according to gym member Chuck Sigwart, who spoke to us when he was finished exercising.

Member Jon Centeno said "40 people were max in there, so a lot less people in there than there normally are. Just the need to clean equipment down, spacing, masks on."

Shortly before 10:30 a.m., Bellmawr officers approached the door. The crowd converged then listened as an officer said police were present for everyone's safety. The officer added that normally this crowd would be in violation of the executive order but, "On that note, on that note, have a good day." The crowd roared.

Last week, co-owner Frank Trumbetti posted a video online about his decision to open the gym's doors. He says his own mother is hospitalized with coronavirus, so he takes this virus seriously.

Trumbetti said he is proposing an organized peaceful reopening of the state, not just his gym.