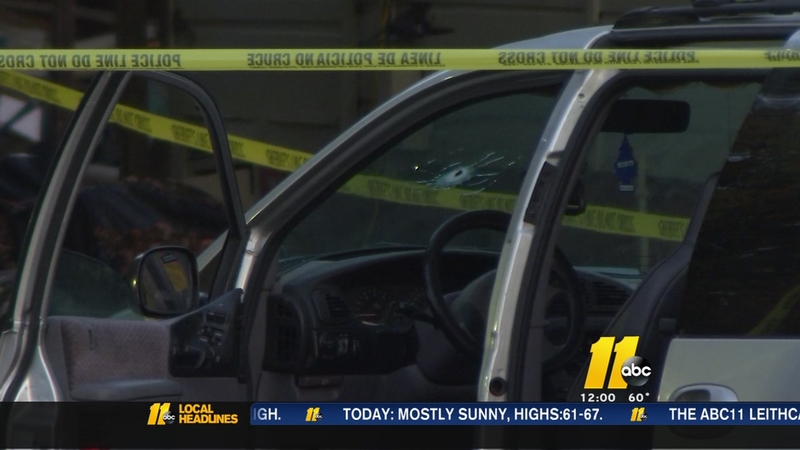 DURHAM, North Carolina (WTVD) -- Authorities in Durham County were seen swarming around a minivan after receiving a call about a shooting early Thursday morning.

Around 5:30 a.m. Durham County deputies and EMS were called to Denver Avenue and Hoyle Street.

When they arrived, they found James Docher, 35, with a gunshot wound. Docher was taken to the hospital where he later died. A woman also inside the van was not injured.

In security footage obtained by ABC11, it shows the driver of a light-colored sedan stopping mid-street before a flurry of shots are fired by what appears to be the driver and a passenger. They were targeting the minivan.

"I didn't know rather to crawl on the floor or what," he said.

Authorities said a preliminary investigation suggests it was not a random shooting.

Detectives have not yet made an arrest in connection with the incident.

ABC11 has decided to slowly reduce the number of stories on the website that have a comments section. We believe very strongly that our audience should have an opportunity to discuss and debate events in our world, however, we have not been able to moderate the comments as well as we would like. Instead of hosting a platform that could allow a few loud and ugly voices to dominate a conversation, we want to encourage everyone to join us on our social media platforms and speak out there. Facebook: facebook.com/ABC11 Twitter: twitter.com/ABC11_WTVD
Report a correction or typo
Related topics:
durhamshooting
Copyright © 2022 WTVD-TV. All Rights Reserved.
TOP STORIES
Officials: Buffalo, Uvalde shooters allegedly abused animals
Canes seek series lead against Rangers in game 5
OBX beach goers urged to wear shoes on beach
Onlookers urged police to charge into TX school: 'Go in there!'
UNC softball player to coach in summer baseball league
Columbine survivor reacts to Texas elementary school shooting.
Kevin Spacey charged in UK with 4 counts of sexual assault
Show More
RDU adds new airline, another adding several new routes
Should you talk to young kids about mass shootings? And how?
Fort Bragg soldier killed in Afghanistan to be honored
Timeline breaks down Uvalde shooter's movements day of massacre
In video, 'angry' NC Gov. Cooper pushes for stronger gun laws
More TOP STORIES News