A march and rally was held Friday evening in Durham in support of Freddie Gray protesters in Baltimore.

DURHAM (WTVD) -- A march and rally was held Friday evening in Durham in support of Freddie Gray protesters in Baltimore.

Demonstrators started marching from police headquarters to the Durham County Jail around 6:15 p.m. Police officers on the ground and on the rooftops kept a close eye on the crowd.

Protesters aired concerns about how black men in police custody are treated, and about what protester called unfair conditions inside the county jail itself.

"Equal rights matter more than being trapped in jail where people don't belong," said one protester.

"If you got money you can get out of this jail. If you don't have money they offer you a plea, and if you don't take their plea you're going to sit there in jail and wait," said protester Scott Bullock. "And they're going to force you to take the plea. It's the people with the money that get out of jail."

The number of protesters swelled to more than 250 at the height of the demonstration. It was a diverse group. There were even some adults with their little ones.

Despite the children's presence, there were a few profanity laced chants which disparaged the police.

Police on foot, in cruisers, and on bicycles blocked off the perimeter as they marched clockwise around the jail. They were down East Pettigrew, then onto South Roxboro, up South Dillard, and finally around North Mangum.

Demonstrators billed the event as a Baltimore solidarity march. Their message was the flare up in Baltimore could happen here in Durham because of what they call a biased justice system and bad policing.

"What we see in Baltimore is really ugly and is the result of a system that's broken and a system that doesn't care about black people or people of color in general," said a protester named Chauncey.

"If Durham is not careful, what happened in Baltimore is going to happen here. I've seen some things that really concern me," said Durham activist Victoria Peterson. "Not all police officers are bad. We have some good, but there are some few that need to be weeded out from the department."

At last report, there were no reports of vandalism and very little confrontation. Police in riot gear did form a line to keep marchers from entering the Durham Freeway.

Thursday night into Friday morning, a Durham business was vandalized with broken windows and graffiti that read "Solidarity with Baltimore."

Before Friday's march organizers vowed to have a peaceful demonstration. 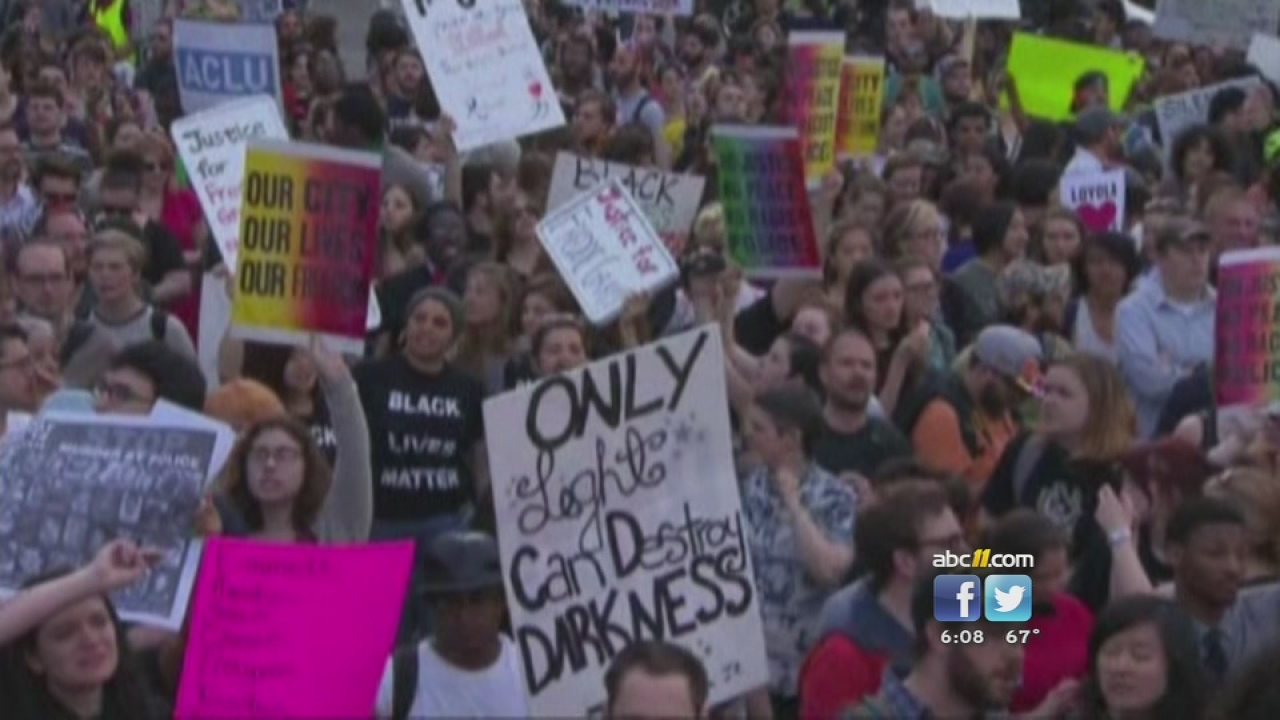