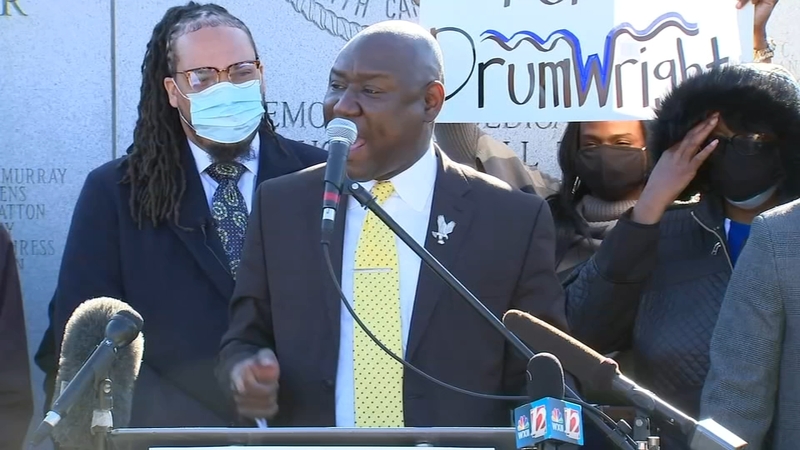 Crump and Drumwright gave a news conference just before 1 p.m. in front of the Judge J.B. Allen Criminal Courthouse ahead of a court hearing for the October 31 march led by Drumwright, which resulted in law enforcement deploying pepper spray near protesters.

Crump, a Lumberton native, leads the legal team for George Floyd's family. He is also the attorney for the families of Breonna Taylor, Ahmaud Arbery and Jacob Blake.

During the news conference, Crump said he believes the arrests made in the Oct. 31 march to the polls were "trumped-up charges."

Crump said the young people arrested during the demonstration should be able to "declare their truth and fight fo freedom in their way."

"It may be different than some of the older civil rights leaders but it is incredible when you have leadership from the old and the young come together in the name of justice," said Crump.

The attorney said he came to Graham, North Carolina to "show America what voter suppression looks like in 2020" and said he spoke to Stacey Abrams, Rep. James Clyburn and Sen. Kamala Harris about what happened in Alamance County in late October. Crump said those he spoke with stood with those in Graham and want to make sure they can exercise their First Amendment rights and peacefully assemble.

Crump and Drumwright will give a news conference at noon in front of the Judge J.B. Allen Criminal Courthouse ahead of a court hearing for the Oct. 31 march led by Drumwright, which resulted in law enforcement deploying pepper spray near protesters.

Crump compared the Graham October 31 march to the polls to that of Selma, Alabama in 1965.

"In North Carolina, It is crucial that we have a right to vote, no matter how much they try to oppress us and suppress that vote."

"We have to free 'The Graham 12' from these outrageous felony charges because these young people were simply trying to help people vote," said Crump.

"Alamance County, we're not going to let this racist system stay standing," Drumwright said Wednesday. "It's going to come down."

. @gregdrumwright leaves court after facing a judge on charges stemming from a chaotic March to the Polls demonstration. Law enforcement pepper-sprayed folks in the crowd. #ABC11 @ncnaacp pic.twitter.com/PwAo3lEk2b

On October 31, Graham police deployed pepper spray during a march to the polls organized by Drumwright -- a march that included many people not eligible to vote in Alamance County, including Drumwright himself, a Guilford County resident.

Drumwright did have a small victory in the courtroom Wednesday: A request to have him banned from the county was denied.

The sheriff's office said when it investigated the incident, an officer was assaulted by Drumwright. The reverend claims that the latest charges against him are a form of retaliation.

Drumwright told supporters that it is Sheriff Terry Johnson who should face felony charges for the pepper spray incident. He's also calling for Mary Kristy Cole, the police chief in Graham, to step down and is suing Johnson and Cole for law enforcement's actions last month.

On November 29, more than a hundred people joined Drumwright for the "Ready for Change" march, which happened nearly a month after the pepper spray incident.

The group, organized by the Alamance Alliance for Justice and Justice 4 the Next Generation, made several stops through downtown Graham including the Alamance County Courthouse with a heavy police presence watching the peaceful group closely.
"Folks have been processed through the courthouse, which is supposed to be a hall of justice but in many cases, in a disproportionate number of cases to Black and Brown people, it is a hall of injustice. That is why we are stopping by here right now," Drumwright said. "We come together to gain justice for the next generation, we don't fight for ourselves, we fight for our children and our grandchildren."

During Rev. Drumwright's news conference, he called for charges to be brought against Alamance County's Sheriff for the pepper spray incident as well as Graham's police chief.