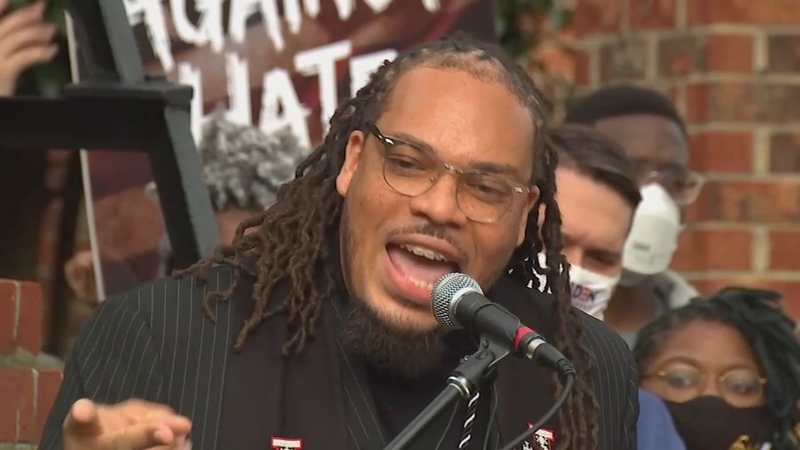 GRAHAM, N.C. (WTVD) -- Reverend Gregory Drumwright returned to the Alamance County Historic Courthouse on Sunday afternoon to dispute felony charges against him to the public. There, he called the charges erroneous.

The 40-year-old said during a news conference the law enforcement's actions on Oct. 31 during their rally, kept people from registering to vote and voting on the last day of early voting. However, Alamance County Sheriff's Office says Drumwright violated the law when a gas can and generator were discovered on historic courthouse property -- the sheriff's office calling it a fire hazard.

The sheriff's office alleged that an altercation at the march began while deputies were investigating a report of a person who entered the crowd on the Historic Courthouse grounds with a gasoline can.

Drumwright told folks gathered at the event he used the same generator at a previous protest with no issues from law enforcement.

The march gained national attention when law enforcement could be seen using pepper-spraying demonstrators to disperse the crowd.

"I am just the latest victim of unjust and unfounded charges that seeks to funnel black bodies, Hispanic bodies and our white allies into the criminal justice system for doing nothing else but working against racism," said Drumwright. "Did y'all hear what W.A.R. means? Working Against Racism."

Drumwright also told supporters that it's Sheriff Terry Johnson who should face felony charges for the pepper spray incident. He's also calling for Mary Kristy Cole, the police chief in Graham to step down. He is also suing Johnson and Cole for law enforcement's actions last month.

During the news conference, Drumwright announced he will be organizing a third march titled the "Ready for Change" which will take place on Sunday, Nov. 29.

The sheriff's office released a statement about next Sunday's protest saying, "While the Sheriff's Office supports and respects an individual's constitutional right to free speech, we continue to ask everyone to exercise those rights in a peaceful and respectful manner."