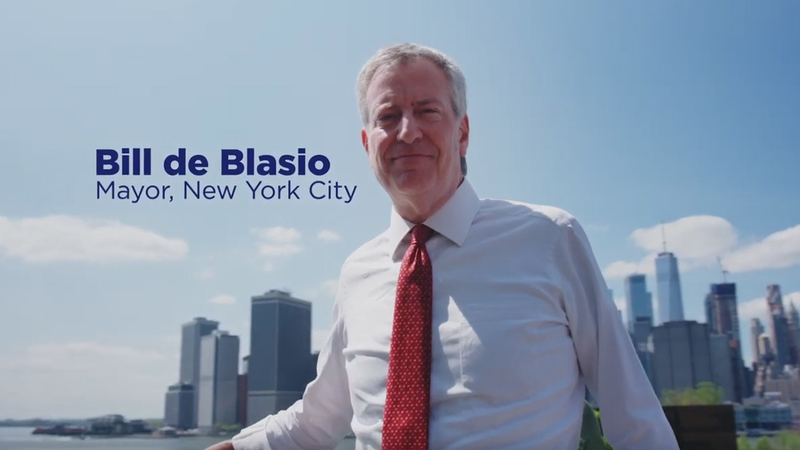 NEW YORK -- New York City's 109th mayor officially entered the 2020 race for president Thursday, posting a video on YouTube and then appearing with his wife on "Good Morning America."

Mayor Bill de Blasio's slogan is "Working People First," and he joins more than 20 other candidates vying for the Democratic nomination.

The mayor took direct aim at President Donald Trump, referring to him as "Con Don." De Blasio, who is in his second term and sixth year as mayor, is expected to travel to Iowa on Friday.
EMBED More News Videos

President Trump responded to the announcement on Twitter a short time later.

The Dems are getting another beauty to join their group. Bill de Blasio of NYC, considered the worst mayor in the U.S., will supposedly be making an announcement for president today. He is a JOKE, but if you like high taxes & crime, he’s your man. NYC HATES HIM!

The president, who was headed to New York City Thursday for a fundraiser, also released a video from Air Force One predicting that the mayor won't last long in the 2020 race.
EMBED More News Videos

The mayor took to Twitter to fire back at Trump.

We're coming for you, #ConDon pic.twitter.com/l0EujCt007


A Quinnipiac University poll back in April found that 76 percent of New Yorkers do not think de Blasio should run for president. The same poll found that 47 percent of respondents thought a de Blasio campaign would be bad for New York City.

"The first reaction is what, is he kidding?" Democratic strategist Hank Sheinkopf said. "But you know what, other mayors have tried, and they've also been forgotten by history. This guy has one big achievement in New York City, it's universal Pre-K, and that's a big deal. So can he run on that nationally? Not impossible. Will it work? The real strategy, wait till the left collapses and hope that he can pick up the pieces."

De Blasio will look for a boost in three of the key early voting states.

In Iowa, where union votes matter, the mayor is pro-labor. New Hampshire is close to his hometown of Boston. And South Carolina is a state with a sizable number of black voters, a group he performs well with.

If he can survive until then, the field may have winnowed considerably. And polls have been wrong about him before.

"Bill de Blasio has never been a front runner in any race he's been involved in," Sheinkopf said. "He was a mayor by accident. He should've lost, according to polls. Ditto for public advocate. He's prepared to take risks."
Following the stop in Iowa Friday, sources say the mayor will head to South Carolina over the weekend.

New York City Housing Authority residents protested outside the Good Morning America studios Thursday, saying they will call on the mayor to fix the NYCHA public housing authority and solve the crisis of affordable housing in New York City.

De Blasio is not the first New York City mayor to run for president.

Back in 1972, Mayor John Lindsay launched a bid for the White House. After he left office, Rudy Giuliani ran for the Republican nomination. Neither candidate did well in the early voting states.