Here are the regulations Raleigh leaders are proposing for Bird scooters 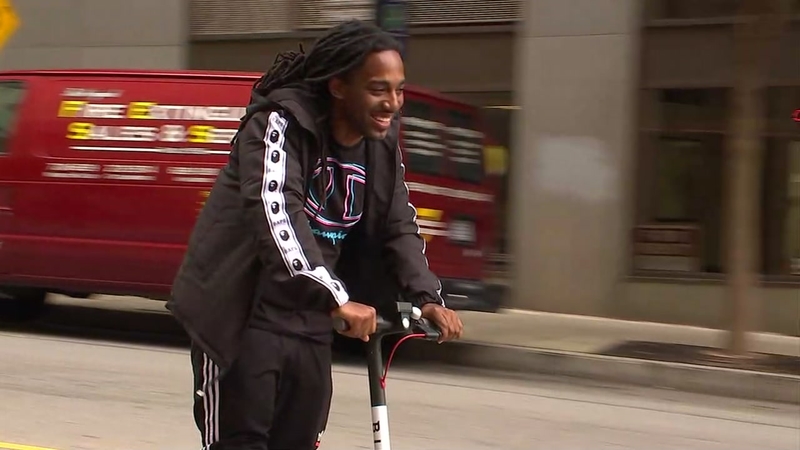 Bird scooter regulations on the agenda

RALEIGH (WTVD) -- New rules of the road for the City of Raleigh?

The city is laying out their plan to regulate hundreds of scooters already zipping across roads and sidewalks.

Right now, Raleigh has about 1,300 scooters -- including Bird and Lime. Back in July, the city started with fewer than 200.

Scooter rental app Bird rolls into Raleigh, but will it run into trouble?
On Wednesday, Bird launched in Raleigh. The app allows users to unlock scooters for $1, plus 15 cents a minute. But safety concerns linger.

On Tuesday, city leaders discussed enforcement of the scooters, as well as potential issues.

Bryant and riders like him are petitioning city council expressing their desire to ride without limitations.

City of Raleigh wants to regulate Bird scooters
Riders on electric scooters are zooming past pedestrians on the sidewalk in downtown Raleigh.

"I've emailed every single one of them," Bryant said.

But not everyone believes the scooters should set up without regulations.

"As a driver, I think it's a little bit dangerous," said Scott Conklin. "They are fun to ride. They are inexpensive. But on the other hand, to have a functioning downtown that's not all over the place, you need some rules in place."

Here are the city's proposed regulations:

Bird says it will work with the city to build a policy that works for everyone.

Its statement said in part:

"We believe people should have more access to affordable, environmentally friendly transportation options, not less."

In the meeting with city leaders Tuesday, Raleigh officers described how difficult it is to enforce the rules.

"The concern for me as Chief is the unreasonable expectation when you have a thousand plus scooters throughout the city," said Chief Cassandra Deck-Brown. "This places additional pressures on our officers, who are already responding to many police-related incidents."

Wake County EMS said there have been 22 reported incidents involving the scooters since they first landed in Raleigh in July.