Thankfully, a local conservation warden wrangled the wild 120-pound burglar, and no humans or animals were harmed.
WTVD 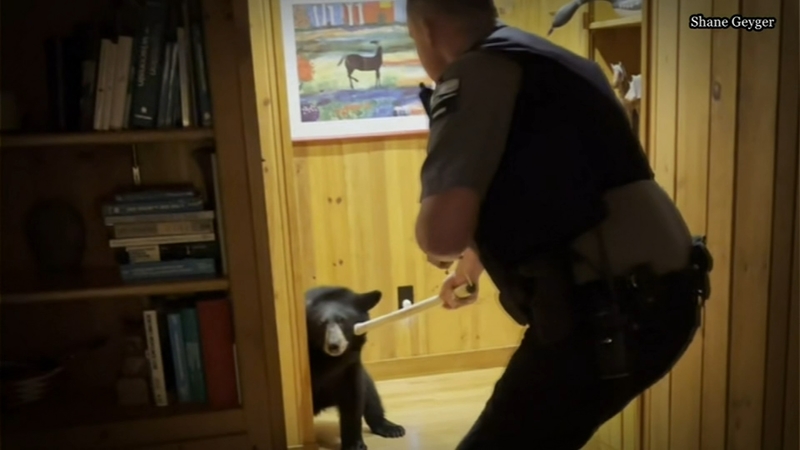 CRIVITZ, Wis. -- As a family slept inside a Wisconsin vacation home, a hungry bear snuck in through its kitchen window. Thankfully, a local conservation warden interrupted the wild burglary, with the wrangling of the 120-pound animal caught on camera.

Just before midnight on Sunday, the young bear punched through the window's screen and climbed inside the cabin near Crivitz, about 50 miles north of Green Bay.

The bear snacked on some food from the kitchen before moseying over to the master bathroom, said Tim Werner, the Wisconsin Department of Natural Resources warden who coaxed the animal out of the home.

That's when the startled guests from Illinois woke up, closed the bathroom door and ran out of the house, Werner told WBAY-TV.

Werner was then called to the scene.

"Our original plan was to actually try to funnel this bear -- open the bathroom door, use some furniture to funnel it to the front door and let it out that way. Unfortunately, the bear didn't cooperate with us and didn't want to come out of the bathroom," he said.

A young family hiking a popular trail in British Columbia, Canada, say they were followed by a black bear for approximately 20 minutes, KUTV reports.

Noticing that the bear was just a juvenile, Werner said figured he could use a catch pole to jostle it out.

It worked, but not before a stubborn, feisty struggle that ended with the bear released outside, unharmed. Video from Shane Geyger, which has since gone viral, shows the bear being unwillingly removed from the home.

"I've dealt with wolves and bobcats and other animals that have been caught in traps and helped release those, but as far as releasing a bear from a house, this is a first," Werner said.

Bear encounters are increasing at this time of year as adults go in search of a mate and cubs are sent off to venture on their own. The Wisconsin DNR estimated there were 23,200 black bears in the state last fall.

Werner said never expected the video would make him a "celebrity" bear wrangler.