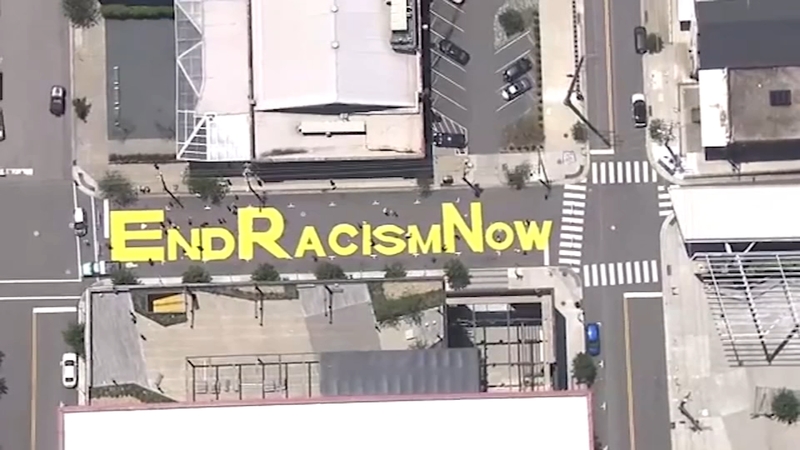 RALEIGH (WTVD) -- Lining one of the major roads in downtown Raleigh is a 20-foot, bright yellow statement that speaks for itself, "End Racism Now".

Inspired by the Black Lives Matter Movement in Washington D.C., volunteers with CAM Raleigh spent 6 hours Sunday morning turning a block of W. Martin Street into the largest mural yet in downtown Raleigh.

The street-art comes as a result of George Floyd demonstrations across the state and the country as a whole.

An artist named Kyle had plans of going to the beach but immediately canceled his plans to come mark the letters with tape. The mural was finished by 7 a.m.

Charman Driver, one of the organizers, says she called Mayor Mary-Anne Baldwin on Saturday to see if they would be allowed to paint the message on the 100 block of Hillsborough Street, in front of the Confederate obelisk by the North Carolina State Capitol building but denied the request citing that it was state property.

However, Baldwin encouraged volunteers to paint it in front of the contemporary art museum.

"Really it would have made a lot of sense, 'End Racism Now' is what it says, leading up to that Confederate statue that is so painful for so many Americans. We'd like to see it gone. We're not going to stop," Driver said.

Charman says this was a good way to get community participation but they aren't completely satisfied, they believe they still have a long way to go and want to do a similar mural in front of the Confederate statues.

"It feels great. It's beautiful and it amplifies our voices," said Driver. "We just have to keep the momentum moving. Keep going, pushing, pressing, we are going to get the statues removed, we're not going to stop and we want to do it peacefully."

I’ve seen a lot of parents out here showing their young children the mural on West Martin Street #EndRacismNow pic.twitter.com/2L97sfYSRj

Cary resident Jonathan McNeil says this everyone should come and see it in person.

"It's emotional that it's still going on in 2020, that we still have to do this type of thing here. Yesterday I went up to the march at the state-building and to hear 'We Shall Overcome' playing in 2020, hurt.

I think there should be more people out here viewing this because this is a great statement."