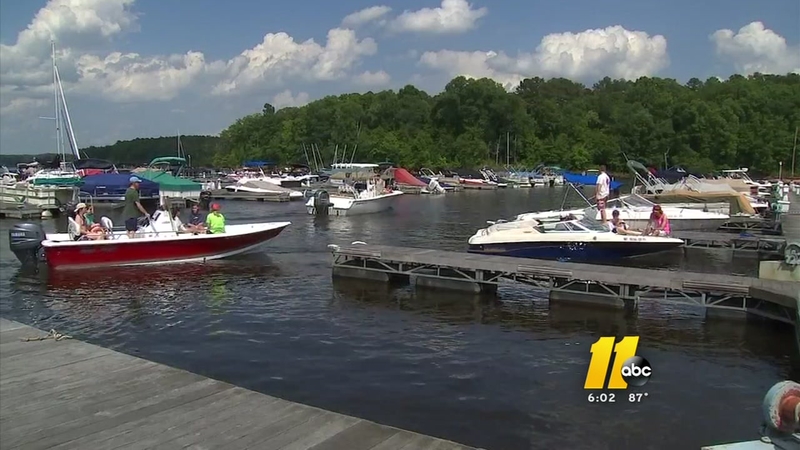 DURHAM, North Carolina (WTVD) -- After recent boating incidents, law enforcement agencies around the state are reminding the public about the dangers of operating a boat while under the influence and other hazards on the water.

RELATED: MAN PULLED FROM WATER IN JOHNSTON COUNTY HAS DIED

Boating accidents are unfortunately common this time of the year.

On Saturday, a water rescue was issued to help two boats that collided on Falls Lake. Even though no one was injured, officials said incidents like this are a "very real danger."

Like driving, boating requires care and situational awareness; however, unlike driving, the waters have no lanes, no stop signs, and no traffic lights.

Owner and manager of Rollingview Marina, Brandon Gooch, said one way to reduce danger is to reduce speed, which greatly diminishes a boat's wake.

"Most of the danger comes for kayakers, paddle boaters, and canoers," the third generation dockmaster said. "If they get hit with a rather large wake, they, in turn, can be flipped over."

But the biggest worry for families is drunk boaters.

"When you see someone coming your way, it's a good idea to look around you, look behind you," Gooch said. "When you try to move over, make sure there's no one you're going to cut off."

In 2016, 23 people died in boating accidents in North Carolina. Officials said a major contributor to these deaths is that the victims were not wearing a life vest.

Of the 23 fatalities, only three people were wearing a vest, yet state law requires one life jacket for every person on board.

The North Carolina Wildlife Resources Commission (NCWRC) was out on the water Saturday in full force, hoping that their presence will help lake goers make smart decisions.

"We hope by being on the lake, seeing us out there (we can make a change)" Brent Ward with the NCWRC said. "If just one person sees us out and doesn't do something they might have done otherwise, it has all been worth it."

For the seventh year, the NCWRC is partnering with the State Highway Patrol and Mothers Against Drunk Driving for "On the Road, On the Water, Don't Drink and Drive," which is a nationally recognized campaign that combines law enforcement resources to ensure the everyone can travel safely during the summer months.

According to the NCWRC, there are five new felony offenses for an operating while intoxicated offense:

Anyone born after 1988 must have a boating license to operate a watercraft.