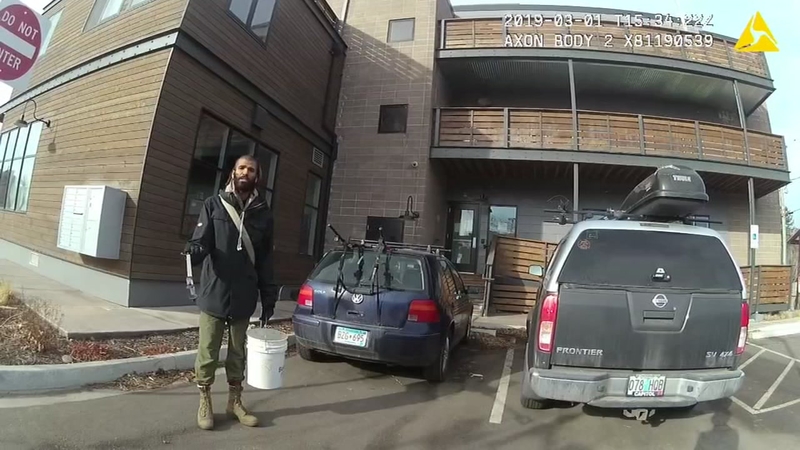 BOULDER, Colo. -- New video shows the heated encounter that went viral back in March -- a black man confronted by a Boulder police officer while picking up trash in his own yard.

Newly-released body camera video shows how it all started.

"I couldn't help but notice you sitting on the patio out there," officer John Smyly says in the video. "I'm just checking to make sure that you have a right to be here, that's all."

"I just told you I lived here and I told you that I'm working as well," 26-year-old Zayd Atkinson responded. "Shouldn't that be enough for you?"

At one point the officer says, "you're probably going to get tased."

An internal affairs investigation found the officer "did not have probable cause to charge Atkinson with any crime" and "should have ended his contact" as soon as Atkinson gave him his name and address.

More officers -- 8 in total -- eventually arrived, some with guns drawn.

"I will not sit down, I refuse to sit down, until you guys put your (expletive) weapons away," Atkinson said.

Finally, police confirm his story by asking someone else if he does, in fact, live there.

"Give him his ID back and we're outta here," one of the officers is heard saying.

"Well I believe that this man had approached me because I'm a black male in an all-white town," Atkinson said later.

Boulder police said there is no evidence Atkinson was racially profiled.

The City of Boulder released a statement Thursday saying, "while the finding likely would have resulted in suspension or possibly termination, Officer Smyly resigned prior to the conclusion of the disciplinary process."