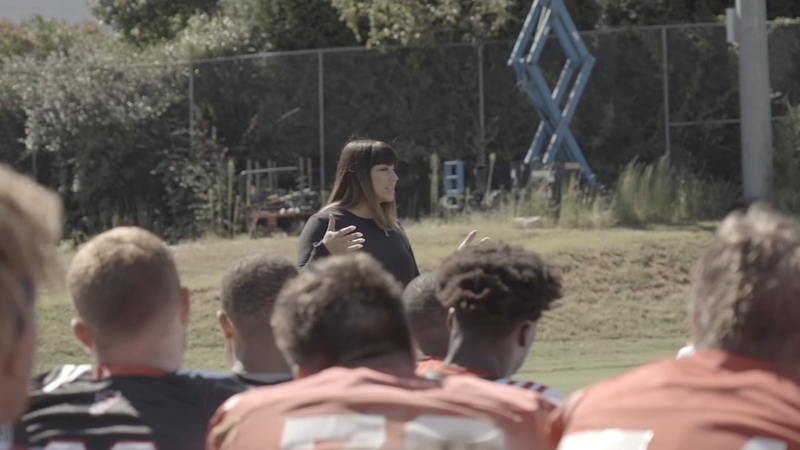 "I was, I believe, drugged and then gang-raped by four (Oregon State) college football players for about six hours," she said. "It was the most traumatic moment of my life."

So traumatic that after going to the hospital, getting a rape kit and reporting it to the police, Tracy planned to kill herself.

"I started going through all of the reasons why it was my fault," she said. "I think that's a normal thing survivors do.

I feel honored to be able to share @brendatracy24 story. Interviewing her today I learned how strong and resilient she is and how much better we all can be. What she is doing for our mothers, daughters, sisters is incredible. @ABC11_WTVD pic.twitter.com/OUUlA1gyv1

For the next 16 years, Tracy suffered in silence until she started sharing her story.

"All of this kind of happened by accident," she added. The coach at the time in 1998, when he was asked about his players being arrested and the charges being dropped, his comment to the media was that 'these are good guys that just made a bad choice,' and he gave them a one-game suspension. I saw that in the media as Jane Doe and I was very angry."

When Brenda began telling her story in 2014, she used this anecdote and would describe how horrible it made her feel. Eventually the coach, Mike Riley, reached out, apologized and asked to meet her.

In the summer of 2016, Riley was at Nebraska, and Brenda went there to meet him.

"I told him how much I hated him," she said. "How his words had affected me. I was able to find forgiveness in that day with him, but I also talked to his Husker team. It was my very first football team. I shared my story with them and that story went viral in the media, and other schools just started calling."

Turning her pain into purpose, Tracy, 45, has been to more than 90 campuses, encouraging athletes, especially football players, to set the expectation.

STRIKING A CHORD WITH PLAYERS

"Her story, I think the best way to put it, is disturbing," said NC State defensive end, James Smith-Williams. "You can't hear that and be OK. It's really uncomfortable, really raw, really true, really honest and it's brutal."

Brenda spoke to the NC State football team last spring. It stuck with Smith-Williams so much that he wanted to use his platform to do more.

"We all come from women, right?" he said. "Our mothers, someone raised us, my family had that role model that's a woman. We get it. We get the importance of it. That call to arms really stuck with me, she issued that challenge. It stuck on my soul. I haven't been able to feel OK with myself unless I did something about it.

"I just think about all the boys looking up to James and all the people saying I want to be like that, too," he added. "That makes me feel really good because that means someone is going to be safe. Maybe someone won't go through what I went through because of someone like James."

On Saturday, the Wolfpack will host the ACC's first Set the Expectation football game, and Tracy will serve as honorary captain.

"Whenever I walk onto a field like that and have those moments, I just think about the moment where I almost killed myself," she said. "I just think, thank God I didn't or I wouldn't be here for this moment and so I don't know if you know true joy without knowing true pain. I feel true joy."
Report a correction or typo
Related topics:
sportsraleighrapenc state wolfpackviolence against womengood sportssurvivor storywomen
Copyright © 2022 WTVD-TV. All Rights Reserved.
TOP STORIES
Officials: Buffalo, Uvalde shooters allegedly abused animals
Canes seek series lead against Rangers in game 5
OBX beach goers urged to wear shoes on beach
Onlookers urged police to charge into TX school: 'Go in there!'
UNC softball player to coach in summer baseball league
Columbine survivor reacts to Texas elementary school shooting.
Kevin Spacey charged in UK with 4 counts of sexual assault
Show More
RDU adds new airline, another adding several new routes
Should you talk to young kids about mass shootings? And how?
Fort Bragg soldier killed in Afghanistan to be honored
Timeline breaks down Uvalde shooter's movements day of massacre
In video, 'angry' NC Gov. Cooper pushes for stronger gun laws
More TOP STORIES News