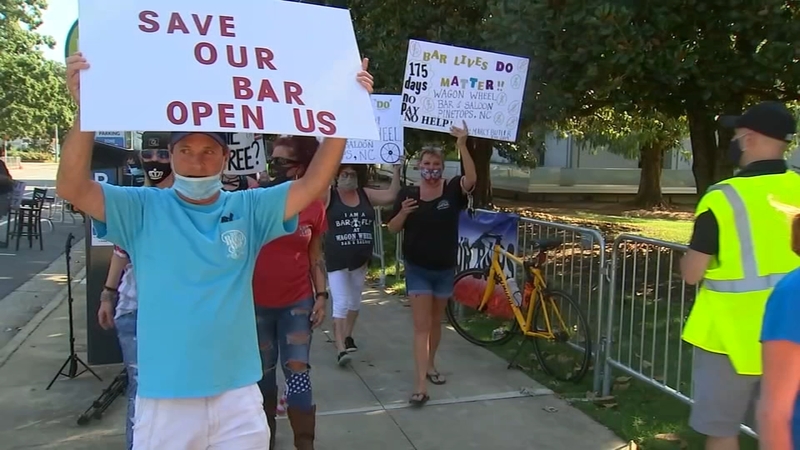 RALEIGH, N.C. (WTVD) -- A group of business owners and workers gathered outside of the Governor's Mansion Thursday afternoon, frustrated with Cooper's decision to exclude bars from reopening under Phase 2.5.

They feel they should be able to operate just like restaurants with reduced capacity and social distancing.

The group gathered outside in hopes of calling attention to their concerns. They say their businesses are dying and workers are struggling to make ends meet.

People came from all over to make sure their voices were heard at the state's capital.

'The price tag is big': Bar owners desperate as Phase 2.5 shuts them out.

"When we can operate in the same manner that is required of other industries that are open right now, I don't understand why we are not allowed that opportunity," said Chris Cozzi, a co-organizer of the event representing 15 bars and nightclubs across the state. "We just want the opportunity to survive. That's all we're asking for."

Group chants “Save Our Bars” outside the @NC_Governor executive mansion. They will march two blocks to the legislature. Bars/Nightclubs remain closed under the governor’s executive order phase 2.5. pic.twitter.com/23hLVLclcV

For some, bars and nightclubs are like a family, a second home, a safe space for members of the gay and transgender community.

Now, they are asking the governor to let them open under Phase 2.5. Under the updated executive order gyms, museums and parks can all reopen. Bars, amusement parks and theaters must remain closed.

Travis Wilcox is a dancer for clubs in Greensboro and Raleigh. He says workers have been volunteering their time to help different bars prepare for reopening. Nightclubs being another group excluded from reopening

"As workers for the bar, we don't get paid much for unemployment as it is so we're running on $30 here and there every week. So we're having to find little side work that we can get," said Wilcox. "We don't want to quit but to support what we love and who we love. C'mon Cooper. Save our safe space."

Sarah Ratcliff traveled from Winston-Salem where she is a bartender. She's been out of work since her bar closed six months ago.

"It is emotional, because I want to go back to work. I want to make money. I want to pay my bills. I don't want to be on unemployment making the $50 to $60 bucks a week," said Ratcliff.

The legislature has tried three times to pass a measure to allow bars to reopen but they have all been vetoed.

A spokesperson from North Carolina Speaker of the House Tim Moore's office released this statement:

"Since the Governor opposes any new legislation helping reopen bars in addition to the three bills he already vetoed, unfortunately there is no hope for these bar owners through the legislative process until Democrats in the General Assembly will support an override."