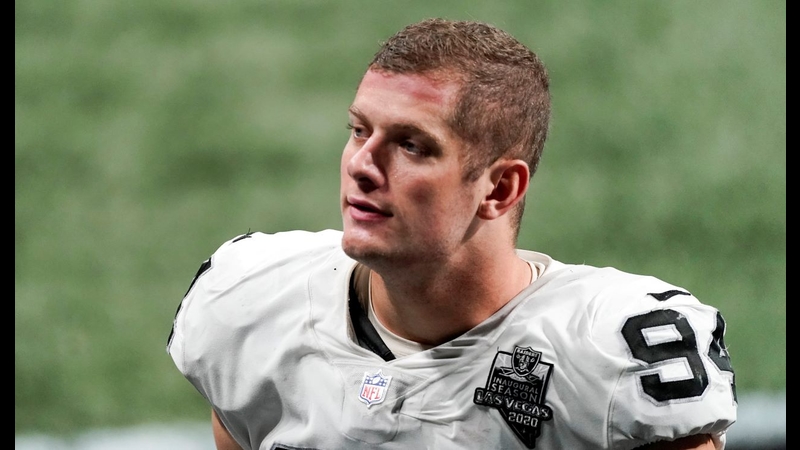 RALEIGH, N.C. (WTVD) -- LGBTQ advocates in the Triangle are voicing their support for Las Vegas Raiders defensive lineman Carl Nassib following his historic announcement Monday, where he became the first active NFL player to come out as gay.

"Being in the NFL, being an active player, I'm hoping very much that the younger audience is going to see this and start becoming more comfortable with who they are in front of their coaches and players," said Johnny Deem, the treasurer of Stonewall Sports Raleigh.

"I always felt like an outlier growing up. I grew up in a farm, middle of nowhere, where nobody was like I was. And it wasn't until I got into big cities, where (I found) there are entire leagues of people that are like me," said Deem.

Sterling Bentley, a former Division III athlete who now serves as the Youth Programs Coordinator for the LGBTQ Center of Durham, touched on the generational aspect of the announcement.

"I think about the people who came before Carl that made this possible for him, and the people who will come after him because they saw him living his truth," said Bentley.

Bentley stressed the importance that many female athletes have played in coming out while playing, in leagues like the WNBA and NWSL.

"Just thinking about Carl and all these incredible athletes who want to uplift -- Laysia Clarendon who is an openly trans player in the WNBA right now who younger me, like those wounds get healed seeing those players get to be open about who they are," said Bentley.

Over at NC State, rising senior Sarah LaTour understands the process of coming out while still competing, doing so after her freshman season for the school's track and field team.

"It really felt like a family so I felt like I was comfortable to tell my teammates that I'm gay," said LaTour.

LaTour first disclosed to one teammate, then others, and then her family, saying she received strong support.

Nassib has played five seasons in the NFL for three teams, racking up 143 tackles and 20.5 sacks. In 2015, while at Penn State, Nassib had 15.5 sacks, leading the country. A year earlier, Michael Sam, who was named the SEC Defensive Player of the Year, came out prior to the NFL Draft. Sam was selected in the 7th round, but never played a snap.

"I thought it was really cool for Carl to come out and show that you can be a football player and still be your true self," LaTour added.

LaTour shared this message to youth athletes who are struggling with their sexuality.

"Whatever you're going through, it's probably really tough right now. But you will find people who are accepting and will love you for you," said LaTour.

As part of Nassib's Instagram post, he announced he was making a $100,000 donation to The Trevor Project, an organization which addresses LGBTQ suicide prevention and mental health challenges. The group has seen a 50% increase in daily online donations since post, and website traffic increased by more than 350%.

In a statement to ABC News, Amit Paley, CEO & Executive Director of The Trevor Project, wrote of the announcement:

"The Trevor Project is so grateful to Carl Nassib for living his truth and for using his platform to support LGBTQ youth. LGBTQ representation matters because it gives LGBTQ youth the chance to envision a bright future and dream of possibilities. We hope this historic moment for the NFL will foster LGBTQ inclusion in professional sports and inspire young LGBTQ athletes across the country to pursue their talents."

The NFL will match Nassib's donation to The Trevor Project.