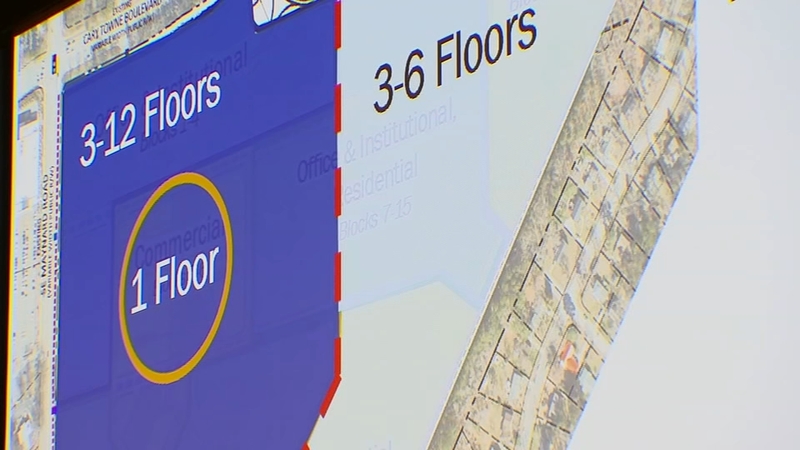 CARY, N.C. (WTVD) -- It was the big public unveiling Thursday night at Cary Town Hall. Turnbridge Equities, the new owners of the dying Cary Town Center mall, presented its plan to the public for the 87 acres between Walnut Street and Cary Town Boulevard.

This was the first and only chance for the public to weigh in; a chance to hear from residents like Pat Whitt who has lived in Cary for half a century.

"I'm excited about this project. But we do have to be careful about what we do with this precious land. There's no more," Whitt said.

Turnbridge wants town leaders to re-zone the land from strictly commercial to mixed-use. The real estate investment firm has devised a plan for a town within a town including new 16-block street grid, over 1 million square feet of office space, retail stores lining the streets, 450 hotel rooms, and 1,800 residential units. Some of the new buildings could soar as high as 12-stories tall.

Not everyone seemed impressed.

"So I'm not sure why it makes sense to chop up a piece of land that's available uniquely to build ordinary stuff," one Cary man said. "There's nothing special about what's being proposed."

Whitt added, "We don't want to be like North Hills and have monster buildings."

There’s another new big plan to transform the struggling Cary Towne Center mall. Tonight, Cary residents had their chance to weigh in on the proposal for a town within the town. #abc11 pic.twitter.com/haSJ7BumnL

It's not the first big proposal for this land. Entertainment golf company Top Golf planned to build here in 2016 but abruptly changed its mind.

And, of course, IKEA was well into the planning stages when it pulled out last year.

Ii wasn't real optimistic about Top Golf. IKEA was a little bit better," Cary resident Matt Taggert told the council. "I think I can speak for a lot of the people in the neighborhood when I say that this is the kind of panacea we've been waiting for."

But neighbors will still have to wait to see the designs of what all the new buildings will look like. The developers were not ready to reveal those quite yet.

"Soon, soon, it's coming soon!, insisted Ryan Nelson in an interview with ABC11 following the hearing. "We're working through that right now. So, honestly, we're taking a lot of this input before we put it out there."

Most of the public comments Thursday revolved around traffic, parking, transit, and maintaining the barrier between the mall and the neighborhood next door.

Town councilors pledged to consider those concerns as it moves into its work session on the project August 28.