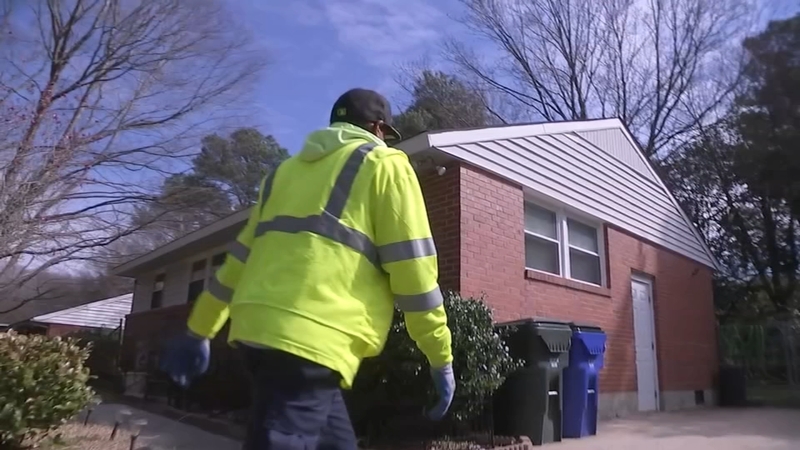 RALEIGH, N.C. (WTVD) -- A sanitation worker for the City of Raleigh is being praised as a hero for lending a helping hand to an 80-year-old man.

It happened in mid-January at a home on Charles McCoy's route. McCoy has been a solid waste collector for Raleigh for more than 20 years. But what happened that day was something completely new.

As he prepared to get back into his truck and continue his route, he heard a faint voice calling out for help.

"I sort of recognized the voice," McCoy said. "I was just looking around and trying to see where it was coming from and just happened to see him on the inside of his garage door."

A feel-good story for your Friday!

When 80-year-old Bill fell in his garage and hit his head, he called out for help. Charles McCoy (pictured) of Solid Waste Services heard him and ran over to call 911. Charles waited for the 🚑 to arrive and take Bill to the hospital. pic.twitter.com/0A2AUHwCU4

Bill, a homeowner on McCoy's route, was lying on the garage floor with a bad gash across his head.

"He was bleeding pretty bad," McCoy said. "It kind of scared me. I immediately just got my phone out and called 911."

McCoy stayed with Bill until EMS arrived, an action that Bill's wife is calling heroic.

She penned a letter to the City of Raleigh commending McCoy's actions.

"Bill missed a step and fell headfirst on to the cement garage floor...I want you to know, if you don't know already, that Mr. McCoy does an excellent job as a service provider, but way beyond that, he is a caring, appreciative person. We will be ever grateful that he responded to Bill's call for help, lent his assistance in getting him to the Emergency Room and took the time to reach out on several occasions to see how Bill was doing."

McCoy said he was appreciative of the kind words written about him in the letter.

“I just wanted to do what I could to help.” This Raleigh worker is being called a “hero” for rushing in to help an 80-year-old man who fell and badly hurt himself. #ABC11 @RaleighGov pic.twitter.com/RtmM9T4GaU

"I don't want to look at myself as a hero or anything. It's just they have been so kind to myself and other city workers that service their house," he said. "They're always making sure that they give us (something), whether it be a soda or gift during Christmas. I just wanted to do what I could to help."

In fact, it turns out Bill fell while taking a soda to McCoy.

Charles McCoy is praised as a 'hero' for helping an 80-year-old man who fell and hit his head.

ABC11 reached out to Bill and his wife who said they wanted the focus to be on McCoy and his kindness.