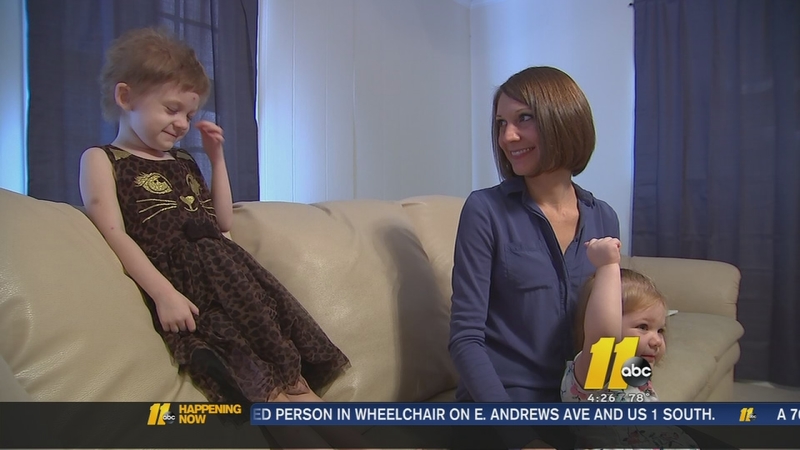 DURHAM (WTVD) -- "Thank you for coming by, this is the most fun we've had all week."

Those were the parting words shared by Candace Hulsey as we left her home, following a sit-down interview about her 4-year-old daughter's battle with cancer. While that might at first sound like an odd statement considering the subject matter of the interview, the truth is, the Hulsey family has a new sense of "normal" these days.

That's because a "normal" day for Candace and her two young girls involves being confined to their Durham home, save for doctors' visits and trips to the hospital.

Little Sadie's immune system is so compromised right now that she can't chance going out in public and catching an infection that could kill her. The family doesn't have many visitors, not only for Sadie's health, but also because their family, including Candace's husband, lives back in Wilmington. In fact, Sadie's dad has to stay there during the week to work and pay their mounting medical bills, and is only able to visit them on the weekends. It's far from ideal, and certainly not something the Hulsey's chose to do.

Just like they didn't choose the horrible diagnosis they're fighting.

Sadie's battle began when she was diagnosed with Juvenile Myelomonocytic Leukemia, or JMML, at just 17 months old.

JMML is a rare cancer of the blood that occurs when too many immature white blood cells are made in bone marrow and crowd out the healthy, normal cells that belong there. It's a very rare disease that accounts for less than 1 percent of childhood cancers. The primary treatment for this is a bone marrow transplant, something Sadie has already tried.

"We spent the year of 2014 trying to prevent a total relapse with just tons of chemo and harsh medicines and all kinds of treatments and procedures. And at the end of 2014, we realized there was really nothing we could do to save that transplant," Candace explains.

So, they tried a second transplant at the beginning of this year, but again, it failed.

"Now we're currently looking at other treatments to try to get everything back under control," she says with a shrug, admittedly at a loss to really answer the question, "so what comes next?"

The uncertainty and the ups and downs are part of their day-to-day life. But, despite the anguish and fear the family is facing, they continue to put on brave faces and hope for a cure for their daughter and the countless others in their shoes.

"We're waiting for, I don't know, more research? Better research? For that magic cure that I know has to be out there," Candace shares.

However to get to that point, childhood cancers need more funding. According to the St. Baldrick's Foundation, only 4 percent of Federal Funding goes to childhood cancer research. And whereas about 60 percent of funding for drug development in adult cancers comes from pharmaceutical companies, almost none of that goes to the kids because childhood cancer drugs just aren't that profitable for big businesses.

As a result, the families of childhood cancer patients throw their support behind various fundraisers, including a national effort called the CureSearch Walk. It's an annual event that celebrates and honors children whose lives have been affected by childhood cancer, while also raising money for life-saving research. The CureSearch Walk is returning to the Durham Bulls Athletic Park this Saturday. Registration begins at 9 a.m. and the walk starts at 10 a.m.

Candace has formed a team to walk in Sadie's honor. And while she won't be able to be there in person, she'll be there in spirit. Meanwhile, despite the rough life she's led so far, Candace says most days she's in good spirits, and that helps give her family the strength to keep fighting.

"I have faith that her amazing doctor and medical team will come up with some brilliant plan," Candace says with a hopeful smile.

OTHER WAYS TO SUPPORT:

Tomato Jakes in Durham, by Southpoint Mall, is holding a fundraiser Friday night. From 5 p.m. to 9 p.m., 20 percent of the profits are going to CureSearch.

Uncle Maddio's Pizza Joint at Parkside Commons in Cary is donating a portion of their profits at dinner time to CureSearch every Thursday through the end of the month.

Peppers Market and Sandwich Shop in Morrisville is donating profits from sales of a grilled cheese sandwich, in honor of Zach Levi who passed away from cancer last year.