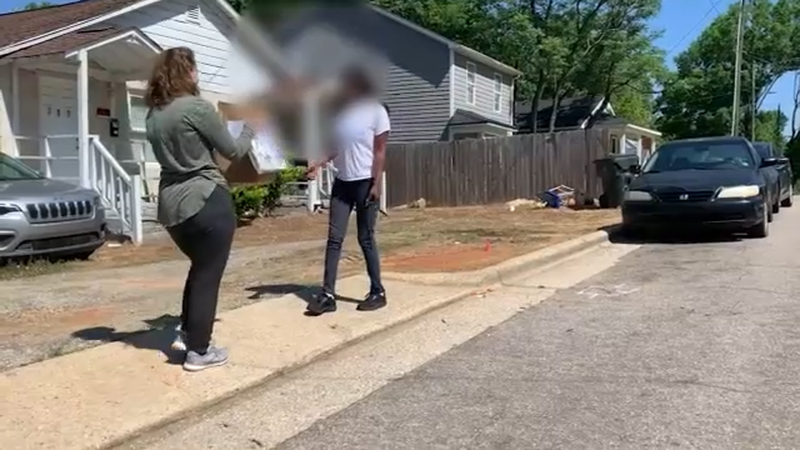 RALEIGH (WTVD) -- One of the bright spots during the pandemic is the number of people who have volunteered to help those most affected.

One of the biggest demands has been for food, as so many slipped below the poverty line after losing jobs to COVID-19.

One local organization is meeting that need with the help of numerous volunteers and local grocery retailers.

"Food insecurity has been greatly exacerbated by the pandemic and the conditions stemming from that," said Neighborfood Express founder Marcus Harris. "And so, in recognition of that we wanted to do more to help the families and the kids who have been affected by it."

Harris worked in the nonprofit-volunteer world for 20 years with organization ranging from Urban Ministries to Meals on Wheels.

That's when he realized his efforts might be multiplied by starting the Marcus Harris Foundation which, in turn, started Neighborfood Express.

"Through the program we take free groceries and supplies to food insecure families in Southeast Raleigh," Harris said, while picking up food at the Fresh Market on Falls of the Neuse Road.

Fresh Market is one of the many Neighborfood Express donors.

Harris is grateful for all the other partners like Interfaith Food Shuttle, as well as those who provide garden-fresh foods including Raleigh City Farm and Burkett Farm.

"We get fresh produce from them and we take those to the families as well," Harris said. "And all the food we take we make sure it's nutritionally dense, so that it is healthy for the families we give it to."

But it's the volunteers who deliver the food who literally drive the program, according to Harris.

"It has been very heartwarming to see how so many people have stepped up and sacrificed their time," he said.

But the program isn't just about food. It also provides computers, books, and clothing.

Though, Harris said, food is the main driver behind his ultimate goal.

"To have a grocery store in southeast Raleigh, where food insecure families can get all their needs met for free while we continue to help them with partner agencies that can support employment, housing, other needs they may have," he said.