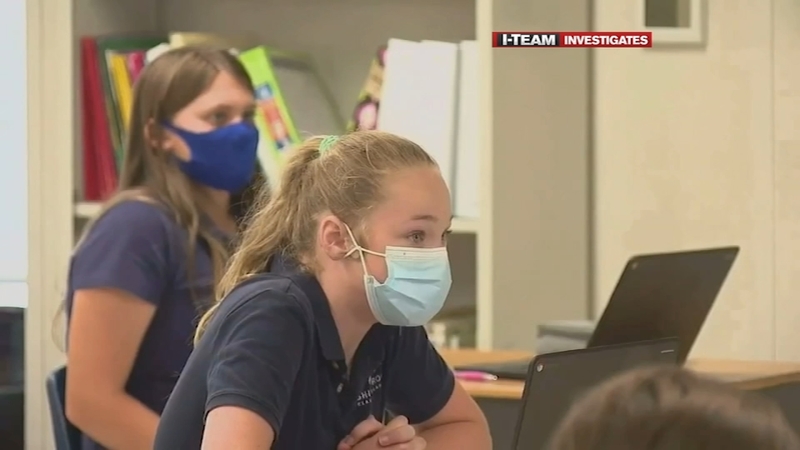 RALEIGH, N.C. (WTVD) -- In summer of 2020, Jermaine Walker left his job as an ER nurse and stepped into a new role in public health.

"I get the break from the physical work, but you know, still mentally, you're still on the go and still doing other things to support COVID," Walker said.

Walker is the nursing supervisor in Wake County and has overseen contact tracing and case investigating throughout most of the pandemic. He's worked alongside the team as it has adjusted its tactics to the rise and fall of positivity rates.

Omicron has now set the team in a new direction.

Walker said the county strives to reach about 400 people a day and realizes that's far from the total number of people infected.

"We're at the point where it's community spread, so contact tracing is not as much of a priority. Now we switch to vaccines and trying to get people to get vaccinated and booster shots," Walker said.

Instead of pinpointing where the virus came from, contact tracers are working to be resources.

"You're already talking to people, you know, we're in the South, we can talk to you about anything. So, we just slid that right in there, kind of like you're standing in line and you're waiting to get checked out, we slid in one more thing, because we could feel comfortable about it," said Dr. Amy Pulliam, CCNC supervisor for contact-tracing efforts.

Walker said it would be a waste of resource to reach out to everyone, so instead his Wake County team targets settings such as schools and congregate care facilities where the virus can spread more quickly.

This is a shift from earlier in the pandemic when health experts touted contact tracers as one of the strongest tools to combat the virus.

North Carolina has dedicated several resources to the effort including developing an exposure app and contracting with Community Care North Carolina to hire around 1,400 employees.

The ABC11 I-Team obtained the contract from the North Carolina Health and Human Services (NCDHHS) that reveals the state has paid an estimated $15 million to Community Care North Carolina (CCNC) for contract tracing efforts. In July, CCNC received around $7 million and has received a minimum of $1.3 million a month since then.

NCDHHS said federal COVID-19 funds were used to cover the contract with CCNC.

Another NCDHHS contract revealed the state spent $500,000 for the development and annual subscription of the SlowCOVIDNC App.

A little more than 1 million North Carolinians have downloaded the app, but only around 1,400 people have reported a positive case, which has led to 5,892 notifications. This represents just a small percentage of the more than 2 million cases identified across the state since the pandemic began.

Users need to obtain a PIN to upload their positive tests. Walker said his department was initially getting some calls related to the PIN, but as the pandemic continued those inquires dropped.

"I'm not sure that took off the way the state was trying to help assist individuals in notifying that they have been exposed, which I guess is where we moved to the electronic notification, because that wasn't going as well," said Walker.

While contact tracers no longer are solely mitigating the spread of COVID-19, Walker said he still believes there is value to funding these resources.

"Even though we don't reach out to the general public, everyone anymore, we still get plenty of calls from people who just need, you know, information, tested positive, what do I do?" Walker said.

Walker explained by helping people navigate to relevant information they are able to mitigate the number of people who end up at the emergency department. His team has also help connect patients to doctors.

Part of this shift comes as the volume of cases reaches unmanageable heights, but part is also driven by the limited number of resources.

At the same time, tens of thousands of tests come back positive a day, many counties are reporting fewer contact tracers working to keep up.

Half the number of contract tracers are working in Wake County compared to last year.

"It's a direct impact on the case investigation side and contact tracing, you know, we see the impact of the shortage. But we do understand that people vaccinated, and the boosters is really what's going to help with the overall virus," Walker explained.

"We have also moved the majority of our full-time county employees out of full time COVID roles as a means of providing full scope public health services (which had been scaled back at this time last year)," a Durham County spokesperson wrote in an email.

NCDHHS said as cases surge, it is relying more on electronic notifications to reach out to people who test positive.

"People should be getting at least a digital notification. And we try to follow up to our best ability to make sure those, especially in the high-risk marginalized communities that may not have digital resources do get that verbal call," said Pulliam.

Pulliam said with the digital notification people can upload their own contacts without having to talk to anyone. She said this option and the increase in home testing is leading to more people coming forward with information.

According to Pulliam, individuals should be getting a digital notification 24-48 hours after their positive test are in the system. She also said the primary goal of contact tracers is not to investigate the origin of an infection.