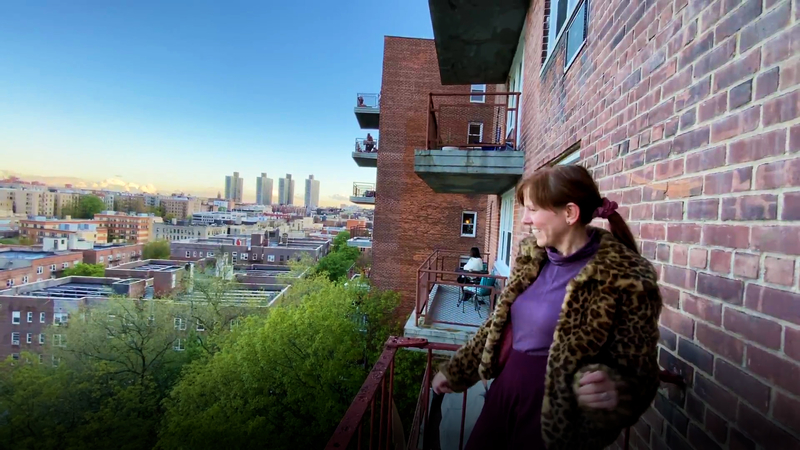 The Saturday night dance fest at 100 Overlook Terrace is the brainchild of Jim Shearer, a former MTV VJ and current host on Sirius XM, who dragged his bass amp out to the balcony one Saturday in late March just after the nightly applause for hospital workers concluded.

"It just felt like it needed a crescendo," Shearer said, "so we decided to play a song."

At the suggestion of a neighbor on a nearby fire escape, Jim turned his one-song spinning session into a full-fledged dance party. Half-expecting angry neighbors and cops knocking on the door, he found himself inundated with messages of gratitude.

"It can sometimes get kind of lonely," said 11-year-old neighbor Emi Hare-Yim. "Me and my friends yell to each other from the balcony, and it's a way to spend time together from a safe distance."

Shearer announces his email address over the microphone for neighbors to send song requests and does shoutouts and dedications.

"My favorite part is when he plays my song," Hare-Yim said. "Because it makes me feel acknowledged, and it's nice."

In a time of collective despair, Shearer knows he's no hero on the front lines of this battle, just a guy with a particular skill doing the one small thing he can to move the needle.

"I'm just glad I get to do something for one hour a week that puts a smile on people's faces," he said.

"It kind of reinstates this positive energy that, no matter what, we're going to get through this together," said neighbor Amanda Rodriquez. "And the best way to do that is through everybody's love language, which is music."
Report a correction or typo
Related topics:
washington heightslive musicdancein our backyardbe localish new yorkall goodwabccommunitylocalishbe localishoriginals
TOP STORIES
Snow likely to start around midnight, last until sunrise
Cooper vetoes bill that would push NC primary to June 7
How many times can I reuse my N95 mask?
10 injured in PA bridge collapse; human chain formed to help
Decades after TV anchor disappears, convicted rapist denies connection
LATEST: Breakthrough cases make up 37% of new COVID infections
Durham Police arrest two in Nov. shooting that left 1 dead, 2 injured
Show More
Moderna launches trial for HIV vaccine that uses mRNA technology
Durham Police make arrest in fatal hit and run
What is antisemitism? Explaining anti-Jewish ideas and hate
Holocaust survivor, great-grandson educate next generation on TikTok
Essentials to keep in your car during winter storms
More TOP STORIES News