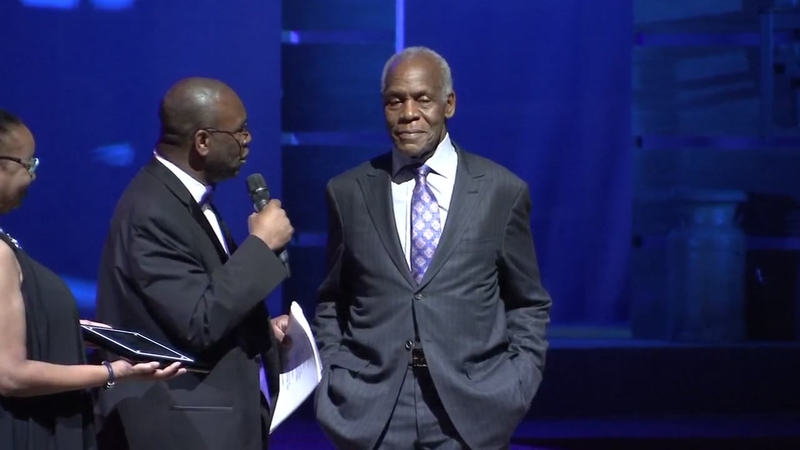 Danny Glover, the actor famous for his movie roles in the "Lethal Weapon" franchise and as "Mister" in "The Color Purple," was honored by the Hillside Drama Department with a Trailblazer in the Arts Award.

Glover's appearance came as Hillside's vaunted Drama Department held its Opening Night Gala for the premiere of its fall musical, "The Color Purple."

When Hillside High in Durham wanted to kickoff its fall musical, The Color Purple, they brought in one of the film’s original stars, @mrdannyglover#abc11 💜 pic.twitter.com/hd8XZlOgWn

Glover's co-star in the film version, Margaret Avery, who played Shug Avery, was also here to accept a Trailblazer Award. She told us she was inspired by the young student actors she met on campus.

"When I walked in and saw all these kids, a whole stage full of them," she described, "to see this and the beautiful faces and the array of colors and the hope and enthusiasm makes me feel young."

"Because I probably need these young people more than they need me. It's about sharing my strength, hope, and experience," Fargas told us backstage.

Tony-nominated actress Starletta DuPois helped lure all this Hollywood talent to Durham after learning of the dynamic talent being seasoned inside the Durham high school.

"Oh my goodness, (Hillside Drama) is one of the best in the country," DuPois said. "Well, not only are they gifted, but they have a passionate director in Wendell Tabb."

One of Tabb's former theater students at Hillside was among the guests of honor. Kevin Wilson, Hillside Class of 2007, returned to his alma mater fresh off his Oscar nomination for his short film, "My Nephew Emmett."

"I'm still on that cloud and I'm still excited about everything that's happened, and I'm proud to share my experiences with the students," Wilson said. "We need to continue to support these students and Mr. Tabb -- someone I consider to be the greatest mentor, the greatest director, and educator in the world."
Report a correction or typo
Related topics:
arts & entertainmentdurhamdurham public schoolshigh schoolactorawardstudents
Copyright © 2022 WTVD-TV. All Rights Reserved.
TOP STORIES
Snow, sleet, freezing rain expected again this week
NC legislature votes to further delay primaries until June 7
Third arrest made in Black Friday shooting at Streets at Southpoint
Daniel Turcios shot 5 times after crash on I-440, RPD reports
'He was special': Durham friends remember Andre Leon Talley
'We can't get any more': Store struggles to restock shelves
Victim in fatal I-85 crash was just 3 months old
Show More
19-year-old charged in wreck that left 2 Marines dead
Earnhardt Jr. to be inducted into NASCAR Hall of Fame
Raleigh man feels lucky to be alive after bullet found above his bed
2-year-old accidentally shot himself in Harnett County
Biden, 1 year in, says nation weary from COVID but in a better place
More TOP STORIES News