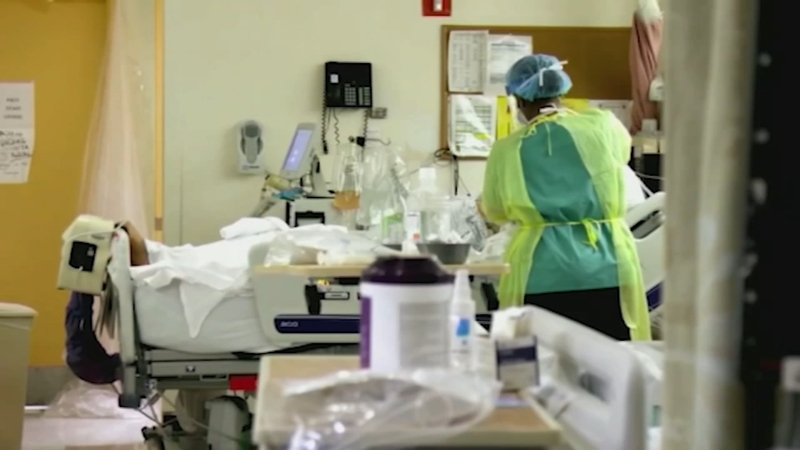 DURHAM, N.C. (WTVD) -- While COVID-19 hospitalizations in North Carolina have stabilized over the past two weeks, there are continued concerns over a surge in cases stemming from the more transmissible Delta variant.

In North Carolina, 67% of the adult population is at least partially vaccinated, which lags behind the national rate of nearly 76%.

Health officials have stressed the importance of increasing vaccinations to prevent future variants.

"We've seen with the Delta variant, it's already been seen in more than 130 countries and it's causing infections even though it's not piercing our vaccine immunity, it's so much more transmissible that it's increasing the number of vaccinations countries need to have to be protected," said Dr. Krishna Udayakumar, the Director of the Duke Global Health Innovation Center.

In the spring, Dr. Udayakumar was part of a group of Duke doctors who urged the US to take a more proactive role in global vaccination efforts, in part over concerns of variant strains.

"The pace at which we've seen variants emerge will increase. We will see more and more variants emerge, and it's really just a matter of time until we see a variant that either partially or fully pierces our vaccine immunity," said Dr. Udayakumar.

In an interview Monday with Bloomberg Television, David Nabarro, a special envoy to the World Health Organization, warned of an increasing risk that variants could evade vaccines.

"We should be proud that we've developed and gotten out more than 5.7 billion doses of effective and safe vaccine around the world. The challenge has been it's been incredibly inequitable in terms of whose had access to those," said Dr. Udayakumar, who noted less than 4% of Africa's population is fully vaccinated.

While there have been an increase in breakthrough COVID-19 cases, all three available vaccines in the US - Pfizer, Moderna, and Johnson & Johnson - remain largely effective in preventing severe illness and hospitalizations.

"Especially the sickest of the sick, they are almost all unvaccinated," said Dr. David Wohl, who added the overwhelming majority of people who have died of COVID-19 are unvaccinated.

"This is the wrong time to be in denial or to be exhausted, because then you're going to let your guard down. So I've seen photos and videos from some of these mass events and people are not wearing masks, and I think that is foolish," said Dr. David Wohl.

Delta variant's transmissibility has led to a major surge in cases, as doctors continue to track if there will be further increases stemming from Labor Day travel earlier this month.

"On average, every person who catches COVID-19 right now spreads it to four to eight other people. Let's say it's just four people, the low end of the estimate. That means four people for every person whose COVID-19 positive, and then those four people infect another four people each, and so on and so on. That's how hyper-infectious Delta is," Dr. Wohl said.

The U.S. has begun to roll out booster shoots for people who are immunosuppressed, and the FDA is set to meet Friday to discuss Pfizer's application for a booster shot for the general public. Both Dr. Udayakumar and Dr. Wohl believe the US can roll out booster shots while providing global assistance.

"If you look in the US, we've already distributed more than 75 million doses of vaccine that have not been administered yet. Those are either going to be used for first or second doses for primary vaccination or they're going to be used for boosters. There's no way we can pull that supply back from the states and send them overseas. So we already have more than two months of vaccine supply that's been distributed in the U.S. So if we follow the science and wait for the FDA and CDC guidance, and if we're able to roll out boosters in that science-based way, we can do both boosters at home as well as increasing the overall vaccine supply around the world. But if we are going to roll out the boosters, it puts even more of an onus to show that we can actually do both instead of just saying it," said Dr. Udayakumar.

"If we're going to do this, we should do it the right way. And we should do it full-force and vaccinate as many people across the planet as quickly as possible. Because doing it slowly may actually cause more harm than we presently have as far as variants go. But it will certainly help people survive, which is why we should do it no matter what," said Dr. Wohl.