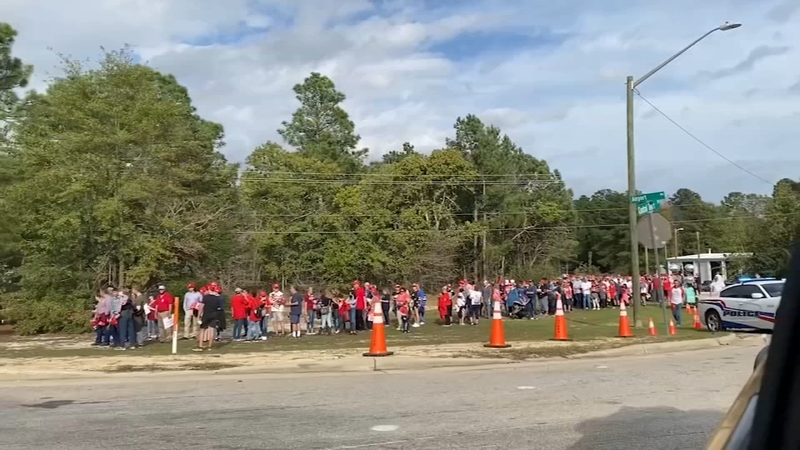 In a statement, the president's campaign said the outdoor rally was canceled due to a wind advisory for gusts reaching up to 50 miles per hour.

The president was scheduled to arrive in North Carolina after a campaign rally in Tampa, Florida.

The event was rescheduled for Monday.

For the first time since June, he will be joined on the campaign trail by his wife. Melania Trump was previously scheduled to be with her husband at a rally last week, but she backed out due to a cough that lingered with her weeks after her COVID-19 diagnosis.

WATCH: When will we know the winner of the 2020 presidential election? These are the 3 likely scenarios
EMBED More News Videos

The rescheduled North Carolina campaign stop is just the latest in a string of visits from the Trump campaign.

Those visits have drawn criticism from federal and state health officials. The experts say since masks are optional and social distancing guidelines are not being followed, the events have the ingredients that the virus needs to spread.

This week Minnesota Department of Health spokesperson Doug Schultz said the department had traced at least 23 COVID-19 cases to Trump campaign events in the state.

North Carolina health officials have said many people are not cooperating with officials conducting contact tracing. Thus making it nearly impossible to actually trace where the cases are spreading.

However, the health department did announce that at least two people tested positive after attending a Trump rally in Gastonia last week. The department also linked another case to a rally for North Carolina Lt. Gov. Dan Forest, the Republican candidate for Governor, held in Yancey County two weeks ago

Gov. Roy Cooper on Wednesday indirectly blasted President Trump's campaign for holding several large rallies in the state over the past month and suggested they are a component of the recent spike in COVID-19 cases across the state.

"I am really concerned with campaigns that are flying all over the place, coming into North Carolina, and holding these large events gathering groups together and then leaving," Cooper said. "We're seeing more of a concentration (of COVID-19 cases) in rural areas and we're seeing it more in the white population. We're seeing spread, and there's no way that large gatherings over long periods of time with people standing together - there's no way that helps things. What we need right now is the opposite. We need people taking responsibility."

Still, Trump campaign officials show no signs of changing their procedures. They have placed a high priority on winning the Tar Heel state and its 15 electoral college votes and appear to value the large campaign rallies as ways to help the president win the state in November.

Now eight days before Election Day, the only known fact is that a record number of voters in North Carolina and across the country have made up their minds and sent in their votes early.

Of course, as the election is just days away, all members of the campaigns are out on the trail making the final pitches to voters.