Is that coal ash in Neuse after hurricane? Depends on who you ask 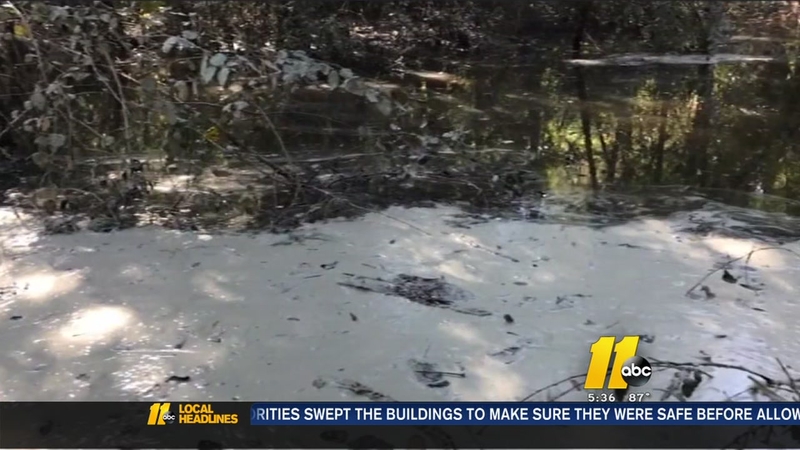 Did coal ash spill in the wake of Hurricane Matthew?

As the floodwater rushed over the now-forested-over former coal ash depositories, it picked up long-lying sludge and pushed it into the Neuse. According to state and Duke Energy officials, "less ash than would fill a pickup truck" spilled, causing environmentalists to sneer.

"We know that that ash was spilling into the river since the river crested," said Pete Harrison with the Waterkeeper Alliance. "And that was last Tuesday on the 11th so it's clear this was happening for a long time. That's another indication that a far greater amount of coal ash has escaped into the river than what Duke is claiming was just a pickup-truck-sized load."

But Harrison's focus wasn't on the heavy coal ash that spilled out of the retired pits. Harrison was on a boat sampling a thick grey sludge, floating on the surface of the Neuse River. "We're talking about slicks on the water that are an inch thick, and mind you, what we can see is only the coal ash that floats."

The question is, what did Harrison find?

He says it's coal ash. Duke Energy's position is that it's a different byproduct of burning coal called cenospheres that's not poisonous.

"Cenospheres are another byproduct of the coal-combustion process," said Duke Energy spokesperson Jeff Brooks. "They are a silica-based, sandy kind of consistency; very lightweight. They can be reused for materials such as bowling balls, insulation, or even kayaks. So they are very lightweight and tend to move with the currents or potentially blow. And they can clump together when wet and congregate in certain low lying areas as we've seen them observed around the H.F. Lee plant."

To Harrison, calling it anything other than coal ash amounts to semantics.

"Cenospheres are coal ash," Harrison said. "Bottom ash is coal ash. Fly ash is coal ash. Cenospheres are part of that mix and so to try to distinguish them from what we all know as coal ash doesn't make any sense. It's a cheap play on words designed to deceive the public. What they're ignoring is what's attached to all those particles, what's attached to these cenospheres, these globules that are in the water here and those are the nasty, toxic heavy metals. That's where your arsenic is. Clinging onto these glassy balls."

"What we've seen so far," said Brooks, "is that our water samples have not indicated in a coal ash constituents in the water. We have not observed any significant quantity of coal ash at the site other than the area that's already been displaced. So if the samples were to determine that there is other material present we would take action but at this point we have not seen that. The densities of the two materials tended to result in cenospheres floating or staying near the top where as those other materials tend to sink in an ash basin and that's typically what we would expect to see here."

"Let's play their game," responded Harrison, "and call cenospheres a different thing than coal ash. If they're claiming that there were two releases, one release of cenospheres and they don't know how toxic they are, and then some other release of the heavier coal ash that doesn't float. I think the same reasoning applies. They could not possibly quantify how much coal ash had washed out of here."