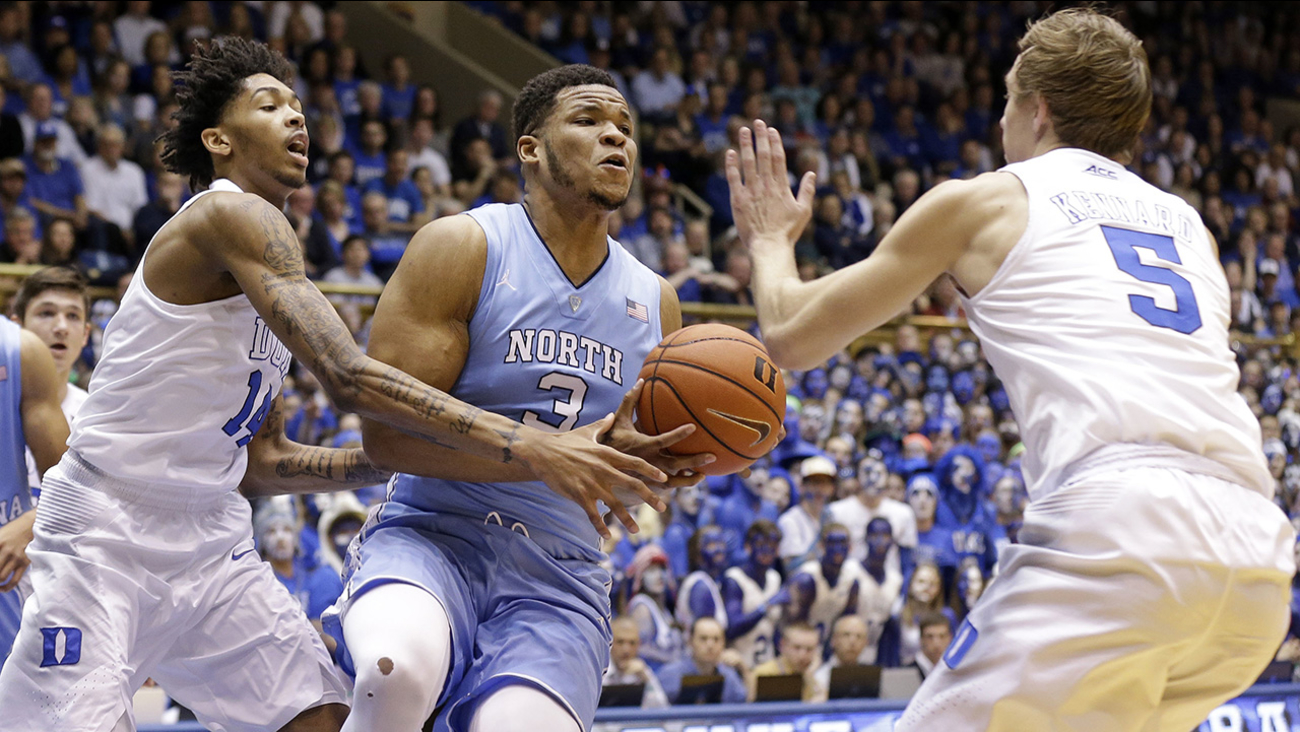 North Carolina's Kennedy Meeks (3) is pressured by Duke's Brandon Ingram, left, and Luke Kennard (5) during the first half of an NCAA college basketball game in Durham (Gerry Broome)

DURHAM (WTVD) -- Rankings and records go out the window when it comes to Duke and UNC. We saw this in the two teams' first meeting this season with the Blue Devils shocking the Heels in Chapel Hill.

For round two of the rivalry showdown, the scoreboard seemed to echo a similar pattern, but if you dug in deeper to the box score, one glaring stat in particular stood out: rebounding. UNC's dominance on the boards featured a 64-29 rebounding advantage, and Tar Heels senior Brice Johnson alone grabbed 21 of those.

Final box score from #DukevsUNC. Look at that rebounding difference, and it was still a close game. #abc11 pic.twitter.com/RvtvsoKzfG

So how was it still such a close game in the final few seconds? Well, thirteen made three-point shots from Duke contributed to a turn around and helped the Blue Devils erase a double-digit deficit and even tie the game up in the second half with a Grayson Allen three.

In a physical game, Allen's 29 points were not easy. And while Luke Kennard chipped in 20 points himself, Duke's other star freshman, Brandon Ingram, did not have his best performance. After the game, Coach K said in order for the Blue Devils to be successful, Allen and Ingram have to be on the floor, but foul trouble plagued Ingram and kept him off the court for much of the first half. As well, the freshman didn't make his first bucket of the game until the 17 minute mark of the second half.

No space on press row, but I've got the next best spot at Cameron a row behind Luke Kuechly at #DukevsUNC #abc11 pic.twitter.com/k7XGS5wQiD

On the other side of the court, though, Marcus Paige's composure down the stretch was a big factor in the win. He showed the poise of a senior playing in his final rivalry game at Cameron, and while he's struggled at times scoring this season, he knocked down four huge free throws in the final seconds to preserve UNC's 76-72 win.

The distance between the two schools is short, but now the Tar Heels return to Chapel Hill with a share of the ACC regular season title and the number one seed in the upcoming ACC Tournament.

RoyW: "It's a wonderful feeling in our locker room, there's no question about that." #abc11 #DukevsUNC pic.twitter.com/ugdSIrPcVZ