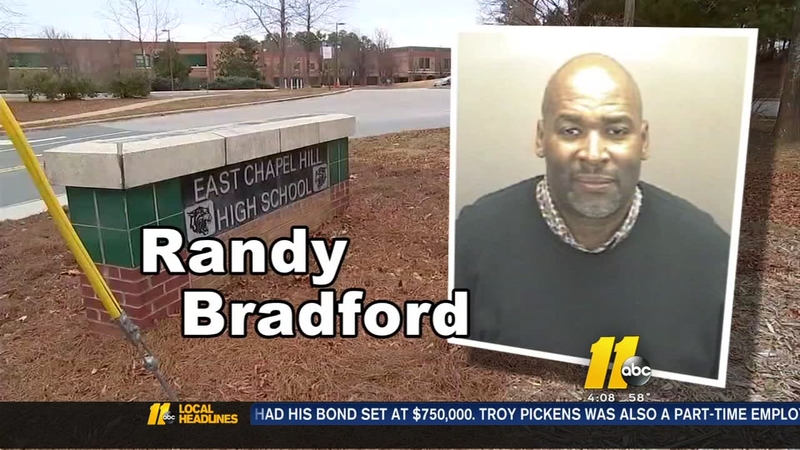 CHAPEL HILL, North Carolina (WTVD) -- The Chapel Hill Police Department has charged 49-year-old Randy Sam Bradford of Chapel Hill with one felony count of a sex act with a student.

The arrest is related to an incident which was reported earlier this month at East Chapel Hill High School. Police said at the time of the incident, Bradford was a security guard employed by the school. An arrest warrant listed him as a school resource officer, but authorities said he was a security guard.

Bradford turned himself in at the Orange County Jail and was released on a $10,000 bond.

Officials with Chapel Hill-Carrboro City Schools said Bradford was hired in 2009 as a strength coach and in 2014 took on an extra duty role as a security guard with the school. The school district would not provide any additional information as it is a personnel matter.

In a message to parents last week, Principal Eileen Tulley said Bradford was fired after the December 5 incident and would not be returning to the school.

Wednesday, ABC11 spoke with Orange County District Attorney Jim Woodall, who said Bradford may or may not face prison time. Woodall says that determination will be up to the judge after weighing the evidence.

Woodall also clarified the type of allegations Bradford is facing.

"What I can tell you is based on what I know about the investigation, there is no allegation that this was intercourse," Woodall said. "It was another type of sexual assault."

Bradford is facing one felony count of sex act with a student. His first court appearance is Thursday afternoon.

ABC11 also stopped by Bradford's Chapel Hill residence. A woman who identified herself as Bradford's wife would not confirm whether Bradford was home. However, she did say "these lies are rocking our family, they're rocking our community."

Bradford's wife went on to say the situation was handled improperly. "(Randy) won't get his job back," she said. "This was just done so poorly. I mean it went to the news before even a trial or anything. It's just like he was already crucified this morning when they put his name out there."

Bradford's wife says the family may also pursue legal action. She says everyone who knows her husband understands he's always been the kind to help someone out and would never do the things he is accused of doing.