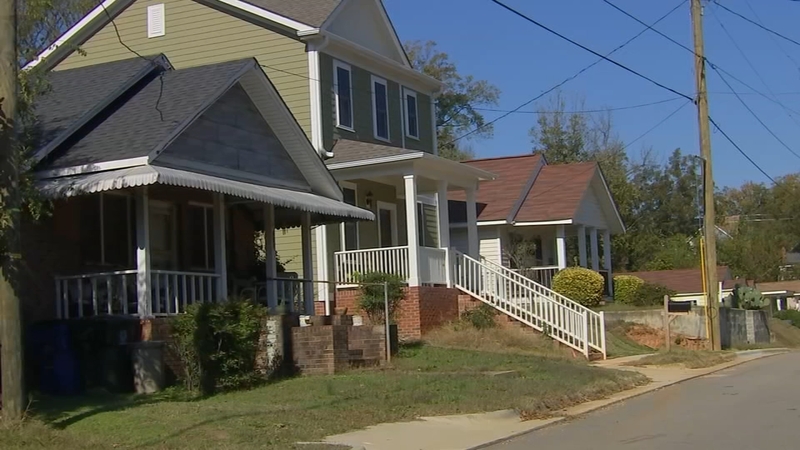 The city of Raleigh is facing backlash over an ongoing effort to bring affordable housing close to downtown after displacing poor tenants.

RALEIGH, N.C. (WTVD) -- Some Raleigh residents aren't buying that an effort to develop affordable housing in southeast Raleigh is a success.

The plan is to build about 150 single-family homes and townhomes on city-owned land, but housing advocates say the project is falling short on its promises.

Rainey grew up in Raleigh and lives in College Park.

In the 1990s, the City of Raleigh designated the area with a high crime rate and a concentration of dilapidated homes for redevelopment.

The city started buying up the homes, spending more than $8 million in federal funds on the acquisitions; public records show the city spent an additional $1 million on relocation benefits for the displaced tenants.

Over the years, the city has been tearing down the houses and sitting on the vacant land until late 2017 when it broke ground on East College Park.

"The city used $8 million to move poor black people out," said Rainey. "And then they turned around and they replaced them with the higher income tax base."

Jarvis said the East College Park project has been transparent from the beginning. According to public records, 21 public or stakeholder meetings were held between 2014-2015.

"(Rainey) wants to be able to transport that neighborhood back to 1960 and she wants to see homes over there that were of the size and scale that were there in the 1960s," Jarvis said. "She wants to see the same people living there who lived there in 1960. Well, time machines don't exist."

Jarvis said the city initially wanted to use many of its vacant lots to build apartments, creating long-term affordable housing along the New Bern Avenue Bus Rapid Transit Corridor.

"Ms. Rainey was adamantly opposed," he said. "She does not want any apartments in East College Park."

Now, with 35 homes built so far, Jarvis said the city is exceeding its affordable housing goals.

Of the 35 homes sold so far, 25 were income-restricted while 10 were sold to market-rate buyers.

As for racial diversity, 34-percent of buyers are Black, 11-percent Hispanic, and 54-percent White.

The city is also offering money to current residents of East College Park to repair their homes. Jarvis said so far, three homeowners have taken advantage of the Homeowner Rehabilitation Program, with more on the waiting list.

"The project speaks for itself," Jarvis said.

"You are looking at Whites, Blacks, and Hispanics," she said. "Whites are leading the charge. That's not diverse."