I-Team: How people voted illegally in 2016 and what's being done now to stop them 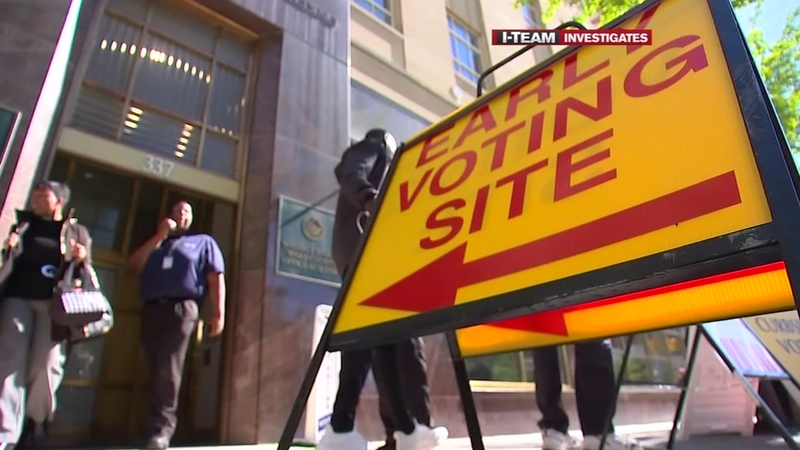 RALEIGH, N.C. (WTVD) -- It's a bold statement, but one that both federal and state officials keep repeating: security for the 2018 midterm elections is the strongest its ever been in history.

"We are in the best position than we've ever been in as a state," Patrick Gannon, a spokesman for the North Carolina Board of Elections and Ethics Enforcement, asserts to the ABC11 I-Team. "We don't know what threats lurk out there, but we feel like we've done everything we can to detect and respond to any incident in North Carolina."

"Everyone should vote. Everyone should feel confident that state and local officials are doing everything they can to secure the infrastructure," Nielsen said. "Because a very important thing here is the adversary wins if we don't vote, right?"

Indeed, the pivotal midterm elections is the climax of a long and divisive campaign season, and it's also the first major national election since the 2016 presidential election, which was mired in controversy surrounding allegations of voter fraud and a roundly-accepted intelligence assessments of coordinated attempts by foreign governments to interfere in the election.

"My biggest concern," Nielsen said, "is that a foreign entity will take the opportunity after the election or the night of the election to attempt to sow discord through social media by suggesting that something did not work as it should in a certain area."

The information was passed on to prosecutors, who filed several charges leading to a series of convictions and plea deals.

Neko Rogers, who lives near Mebane in Alamance County, was one of the illegal voters in 2016, casting a ballot while on felony probation. She attests that she did not know that her probation meant she could not vote, and she says she even showed her driver's license to register at an early-voting site.

Patrick Gannon, the spokesman for the North Carolina State Board of Elections and Ethics Enforcement, acknowledges that the audit found the vast majority of illegal voters were not aware of the rules - and there weren't enough resources at the time for poll workers to identify issues.

"Most of what the audit found was that people were out of jail but on probation or parole or post-release supervision of some sort," he says. "There didn't used to be an immediate check or near-immediate check of felon status. We've updated our systems to have a more immediate check and we've worked extensively with the Department of Public Safety to ensure their people, their parole and probation officers are notifying folks that when they're convicted felons they can't vote until their sentence is completed, including probation, parole, post-release supervision.

As for the foreign nationals voting, Gannon says most of those who voted also did so without fully understanding their citizenship status.

"Some people may not understand the nuance between being a permanent resident or a legal resident and being a U.S. citizen."

The I-Team spoke directly with one of 19 foreign nationals charged - a woman from Germany who has lived in the United States for more than 30 years. Attorneys representing several of the others charged also maintained their clients' honest mistake of not knowing they were ineligible to vote.

Investments in Election Security
Thanks to a federal grant, the State Board of Elections & Ethics Enforcement received nearly $11 million from the Help America Vote Act (HAVA) and state matching dollars to enhance overall election security.

According to Gannon, the funding is key in the ongoing modernization of North Carolina's election management system, known as SEIMS, which manages nearly every aspect of elections. Gannon adds this is the largest IT project conducted by the State Board in nearly two decades, resulting in improvements to the functionality and security of the state's elections systems.

The memo on the HAVA Security Grant details a number of other investments, including $3.5 million in cyber security personnel and training.

Also new in 2018, the state is benefiting from increasing coordination with the National Guard and the U.S. Department of Homeland Security, which sent a "hunt team" to the State Board office in Raleigh conducting a thorough review of their systems.

In a letter posted on the Board's website, NCSBE Director Kim Westbrook Stratch writes: "At the State Board, our goal has always been making sure elections are accessible, fair and accurate. That mission will not be undercut by domestic or foreign threats. You have the right to be confident that your vote counts, and we promise to remain vigilant on your behalf."
Report a correction or typo
Related topics:
politicsncraleighiteamvotingvote 20182018 electionpoliticsi teamfraud
Copyright © 2021 WTVD-TV. All Rights Reserved.
I-TEAM
Why you may be unintentionally paying more at the pump
Fewer deals and increased prices equal an expensive holiday season
Wake County EMS calls surge with no quick fix in sight
I-Team digs into data on pollutants in minority communities
TOP STORIES
Sec. Mandy Cohen, who led state's COVID19 response, to step down
LATEST: UNC expert says much to understand about Omicron variant
Man shot and killed in Fayetteville shopping center parking lot
Pedestrian killed on I-95 in Johnston County
Tiger Woods says his days of being a full-time golfer are over
CDC recommends vaccinated adults get booster amid omicron spread
Show More
Trooper injured in violent traffic stop awarded Badge of Bravery
After daughter's death, Fayetteville dad calls for end to gun violence
Renewed effort to curb Durham gun violence after Southpoint shootings
Post-Thanksgiving lines are long at Wake County COVID testing sites
Fire at Pilot Mountain closes state park, burns more than 300 acres
More TOP STORIES News