Electric scooters will soon scoot out of Raleigh and into Durham 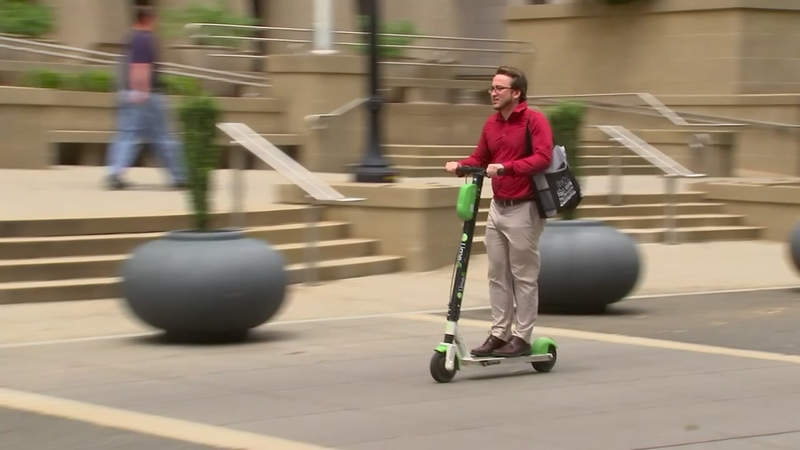 Electric scooters will soon scoot out of Raleigh and into Durham

RALEIGH (WTVD) -- April 30 is the last day Bird electric scooters will be in Raleigh. Lime is also leaving the Capital City. Through a spokesperson, Lime said: "Unless city council reconsiders their burdensome regulations, we will be forced to leave this summer."

"I'm going to miss them," said Rickey Smith. "I haven't ridden them since they've risen the price."

"I'm disappointed, kind of disappointed in both, in the city and in Bird," said Steve Meckman.

In addition, electric scooters are expected to make their debut in Durham. A city of Durham spokeswoman said Monday that a team is reviewing e-scooter permit applications and meeting with e-scooter companies, but there is no set date yet as to when the e-scooter companies will begin operating in the city limits.

A Durham city official said they will allow each company to have 200 e-scooters.

He said the city is optimistic they'll partner with companies to provide an innovative way for people to get around the city.

He said Lime, Spin & Ofo have pulled their bikes from Durham. The dockless bikes were part of the city's bike share agreement.

Bird and Lime previously announced they were leaving Raleigh because of government regulation and increased fees imposed by Raleigh City Council.

A Raleigh spokeswoman said Monday that under the current agreement with the city, Lime and Bird can be on the street through July 31.

Staff will present recommendations to City Council in mid-May. Council members will then have to approve the proposals before any company brings the scooters back.

Bird and Lime previously submitted the following statements about pulling out of Raleigh:

"Despite our efforts to partner in good faith, the city has decided to impose some of the most onerous regulations in the country and unfortunately we cannot continue to operate under such restrictive rules. We will continue our conversations with City Council and make a decision about the future of Lime in Raleigh after we consider our options." -Lime spokesperson Todd O'Boyle

"Bird has come to know and love the people of Raleigh who supported shared e-scooters and embraced our environmentally friendly option as a way to not only get around, but to enjoy, town. Even when the City Council's high fees forced us to raise fares, we were encouraged by the loyalty of a growing community of residents who want to see Raleigh be an innovative leader on transportation, economic development and climate policy. Unfortunately, Raleigh city officials refuse to amend their burdensome regulations on e-scooter providers, and it no longer makes sense for us to provide our service under the city's restrictive leadership. Our time in Raleigh must come to a close but we hope to return in the future when city officials are ready to be more amenable to our business and industry as well as the needs of their constituents." -Bird spokesperson Sam Reed

In January, Bird announced that it was adding a $2 charge to Raleigh rentals, blaming the city for enforcing a $300 per scooter fee.