Ellmers debates Aiken for US House district in NC 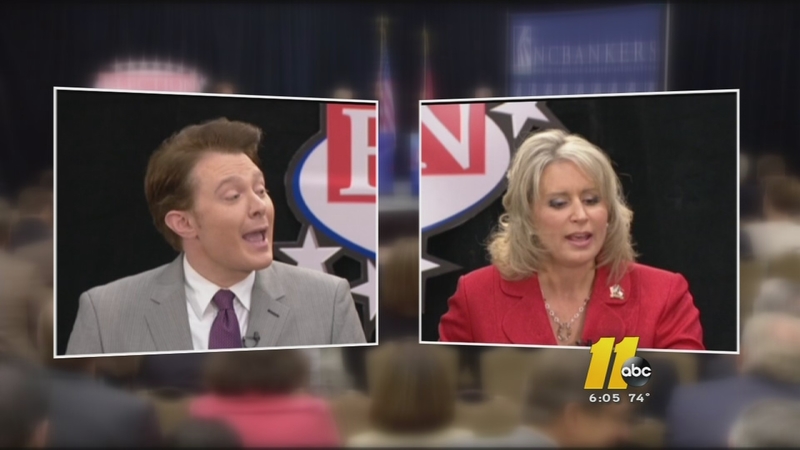 Ellmers debates Aiken for US House district in NC

PINEHURST, N.C. (WTVD) -- Conservative incumbent Renee Ellmers and ex-entertainer Clay Aiken want voters to remember how much they dislike Congress and President Barack Obama, then vote against their opponent.

The two met Monday in Pinehurst for what may be their only debate before voters in central North Carolina's 2nd Congressional District vote on Nov. 4.

From the first question on foreign policy, Ellmers and Aiken took a hard line at each other.

"If beheadings of Americans isn't enough of a call to action," Ellmers told Aiken, who doesn't support using U.S. ground troops to combat the terrorist group ISIS, "I'm not sure what will be for you."

"As soon as we see ISIS as a direct threat to U.S. soil, I think we need to attack in whatever way is necessary," said Aiken. "But, at this point, I wouldn't support sending in ground troops."

The sniping picked up as the debate continued, with Aiken trying to paint Ellmers as a Washington insider working at the behest of Republican House Speaker John Boehner and Ellmers coloring Aiken as a simple entertainer, who is naive to political workings.

Ellmers seized onto a couple apparent slips by Aiken, where he appeared to confuse the U.S. House with the U.S. Senate.

Aiken: "If you go on the Senate site, you'll see that Congresswoman Ellmers' bill was submitted late."

Ellmers: "On the Senate site? Well, I would submit my bill to the House of Representatives."

Ellmers hammered that theme home through the entire one-hour debate.

Topics ran the gamut. Here are excerpts from some of the bigger issues raised:

Ellmers: "What I support is basically for those individuals who are here working toward earned legal work status -- that would not be a path to citizenship. So the answer to your question is no."

Aiken:" I don't know. I don't know the answer as to whether citizenship is necessary for people who are here."

Ellmers: "This Obama-Aiken economy is just killing us."

Aiken: "You might need to get a new writer because calling it the Obama-Aiken economy is just preposterous. I have nothing to do with President Obama, and I can find several areas where I disagree with him."

Ellmers: "As a nurse, knowing what we need in health care reform. Yes it's a law, but it's a bad law."

After tackling other topics, including guns, the economy, and cyber-attacks, the two candidates summed up their positions in closing statements.

Ellmers: "There's a clear choice: myself, a believer in conservative principals or my opponent, who would be nothing more than rubber stamp for Nancy Pelosi and Barack Obama on so many issues."

Aiken: "I'm tired, just like you are, of nothing getting done and if we don't send a message that we're all tired of it then we're only going to get the same thing and we're all in trouble."

Ellmers is seeking her third term.