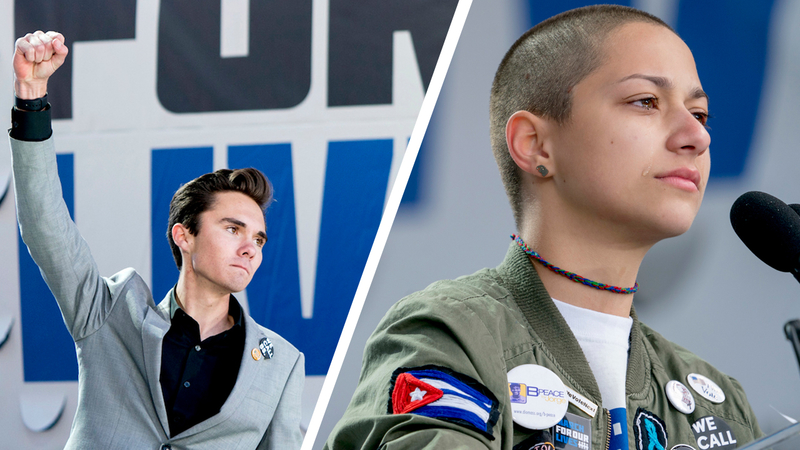 From claims that they gave Nazi salutes to allegations that they're actors, the survivors of the Stoneman Douglas shooting have been dogged by half-truths and conspiracies since Feb. 14, the day a gunman killed 17 people in their school. Here's a look at some of the falsehoods that have been widely circulated across social media in the weeks since the shooting:

Was the entire Parkland shooting staged and staffed by paid crisis actors?

One of the first fringe ideas to emerge after the Feb. 14 shooting was the notion that the students involved were actors working on behalf of a false flag operation, a conspiracy that has been spun up in one form or another after nearly every recent mass shooting event.

According to a Washington Post investigation, conspiracy theories appeared less than an hour after news of the shooting broke, with posters on some websites encouraging others to search for "[Jewish] numerology and crisis actors" on the scene in Parkland.

A Florida state representative's aide even went so far as to claim in an email to Tampa Bay Times reporter David Leary that some of the teens who were interviewed are "not students here but actors that travel to various crisis when they happen."

Here's the email. I asked for more information to back up the claim and was sent another email that linked to a YouTube conspiracy video. pic.twitter.com/VRSVOcjj3E

That aide, who was later fired for his comments, also used a 2017 interview shot in California to cast doubt on Hogg's status as a student in Florida, the Associated Press reported.

A photograph purporting to show Hogg's photo in a California high school's yearbook was also widely circulated, though video later shared by a fellow Stoneman Douglas student proved that to actually be a photo of a Stoneman Douglas yearbook.

There’s a photo going around claiming David Hogg did not attend Douglas, but a school in California. Here’s a video to debunk that: pic.twitter.com/hJsMNSdAsF

Like many conspiracies, the notion of crisis actors is grounded partially in truth. They're a real thing: law enforcement agencies regularly hold crisis drills and simulations in which volunteers pretend to be victims of a mass-casualty event purely for training purposes.

Crisis actor allegations pop up after nearly every mass shooting - people claim to have identified the same person in photographs from various shootings, for example - but there's no evidence to support the claim that Parkland, Sandy Hook, San Bernadino, Aurora or other mass shootings were staffed by such actors.

Was David Hogg at home during the shooting?

Several fringe bloggers have decontextualized a quote from Hogg to make it appear that he admitted to not being in class at the time of the shooting as he had previously claimed.

"On the day of the shooting, I got my camera and got on my bike and rode as fast as I could three miles from my house to the school to get as much video and to get as many interviews as I could because I knew that this could not be another mass shooting," Hogg told CBS for a digital feature about the student response in the aftermath of the shooting.

Hogg told ABC News and several other media organizations in February that he was in an AP environmental science class during the shooting and "had to huddle in there to save my life." The quote from CBS refers to his actions in the hours after the shooting and his evacuation from campus, not his course of action during the rampage.

Did Emma Gonzalez tear up the Constitution?

A GIF shared widely on Twitter appears to show Gonzalez ripping the U.S. Constitution in half, presumably in a show of disrespect to the United States. The image, though, is actually a doctored GIF from a Teen Vogue cover shoot in which Gonzalez is clearly seen tearing a paper shooting target in half.

At left is @tyler_mitchell’s photo of @Emma4Change for the cover of @TeenVogue. At right is what so-called “Gun Rights Activists” have photoshopped it into. #MarchForOurLives pic.twitter.com/jW6tTOv2Db

Did March for Our Lives organizers pay actors to attend the protest?

Conservative commentator Jacob Wohl took to Twitter claiming he had caught March for Our Lives organizers "red handed" by posting a screenshot of a Craigslist ad that he alleged was soliciting "paid protestors."

CAUGHT RED HANDED! #MarchForOurLives organizers paid protestors as much as $300 each! pic.twitter.com/AybRum0gCP

The ad in question clearly states that respondents will be "selling March for Our Lives buttons, flags, wristbands, etc." in exchange for a cash commission and does not mention that those hired would be required to actively participate in the demonstration.

Wohl claimed in a later tweet that he had been offered $50 from the person who posted the ad to attend the march in Washington. It's worth noting that the original ad he shared referenced the Los Angeles march, while his subsequent tweet referred to a Craigslist post in Washington D.C.

While the ad for the Los Angeles street team is still active on Craigslist, there is no such ad actively posted on the Washington Craigslist.

"We sold political buttons. We had no protesters. Can't believe everything you read on the internet!" Vaughn said when reached via email. "Why would anybody need to pay people to go to these events when there was already tens of thousands of people attending. Doesn't make sense."

Did David Hogg give a Nazi salute?

David Hogg, a survivor of the mass shooting at Marjory Stoneman Douglas High School in Parkland, Fla., speaks during March for Our Lives in Washington, Saturday, March 24, 2018.

Hogg's hand gesture at the end of his March for Our Lives speech attracted considerable controversy. Hogg raised his right arm with a closed fist, an expression that many critics labeled a Nazi salute. Doctored images even began circulating showing Hogg wearing a Nazi armband with a swastika on his podium.

Hogg's salute, though, was not a Nazi salute, which is characterized by raising one's right arm with an open hand, fingers slanted upward. His gesture more closely resembles the raised fist, which has been adopted by various groups and organizations for a century and is generally understood to denote solidarity with oppressed people. That same gesture as was notably (and controversially) popularized by African-American athletes during the 1968 Olympics and is not related to Nazi symbolism.


Is Emma Gonzalez a Castro sympathizer?

Emma Gonzalez, a survivor of the mass shooting at Marjory Stoneman Douglas High School in Parkland, Fla., closes her eyes and cries during the "March for Our Lives" rally.

Emma Gonzalez's attire during March for Our Lives also became a flashpoint as viewers noticed a Cuban flag patch on the arm of her jacket, with some on social media slamming her as a communist sympathizer.

"This is how you look when you claim Cuban heritage yet don't speak Spanish and ignore the fact that your ancestors fled the island when the dictatorship turned Cuba into a prison camp after removing all weapons from its citizens," read a meme posted to King's account that was shared more than 30,000 times.

As the Miami New Times points out, the Cuban flag in and of itself is not synonymous with the island's regime.