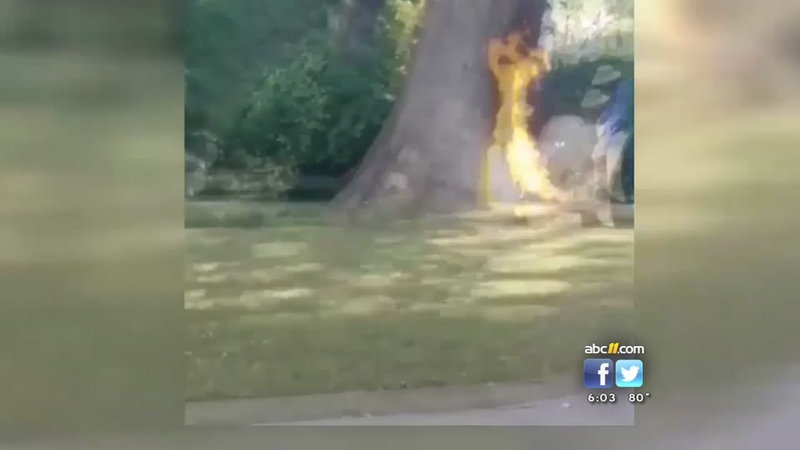 CHAPEL HILL, North Carolina (WTVD) -- Police have identified the person they believe is responsible for an explosion on UNC-Chapel Hill's campus Thursday afternoon.

It happened in McCorkle Place at the Davie Poplar tree, also known as the Tree of Knowledge, before 4 p.m.

After the incident, UNC police quickly surrounded the suspect, who has been identified as 24-year-old Joshua Daniel Edwards, a former student.

He is now being evaluated at a hospital for mental health issues.

According to his parents, they hadn't seen or spoken with their son in several days. They confirmed to WGHP that Edwards does have mental health issues.

Charges have yet to be formally filed against Edwards; however, a potential charge includes arson.

Student Will Freeman said he saw Edwards sitting under the tree moments before the fire started, adding that the suspect starting skipping away saying, "Yes, yes, yes" once flames were present.

"I was standing right there," Freeman said. "It burnt like alcohol or lighter fluid. So it was just there and gone really fast and he backed up and fell to the ground and just had some first- and second-degree burns."

Eyewitnesses told ABC11 they saw the man taking off his clothes and could hear him saying, "Hail Satan!"

A UNC professor was injured when the small incendiary device was detonated on campus.

Video from witnesses showed the professor trying to stomp out a fire at the base of the tree moments before the explosion occurred.

The professor - identified as Dan Reichart - fell to the ground and then quickly ran away with burns to his face and arms.

He was taken to UNC Hospitals for treatment. Reichart later posted on Facebook that he has "some 1st and 2nd degree burns to face and arms, left arm might need a skin graft, we'll see. Will probably be in here until sometime next week ..."


In an email to ABC11 Friday, Reichart said "I was an Eagle Scout as a kid, so I've had lots of experience with fires, and I didn't think this one was too big to kick out. I tried but it grew very quickly, and then it exploded -- I would never have approached it had I suspected there was an explosive device in there."
He also thanked the students who came to his aid.

"I'm grateful to the students who helped me out until the first responders arrived," he said.

ATF agents, the SBI bomb squad, and UNC Chapel Hill Police then moved in to investigate.

Authorities cleared a public parking lot off West Weaver Street in Carrboro where the suspect's car was parked.

Using a bomb squad and robot, they discovered there was nothing dangerous in the vehicle and signaled all was clear.

The Davie Poplar tree marks the spot where, as legend has it, Revolutionary War General William R. Davie selected the site for the University.

The tree has been struck by lightning and survived several hurricanes, school officials said.

Officials estimate the tree sustained at least $100 worth of damage, but school officials said damages are superficial.