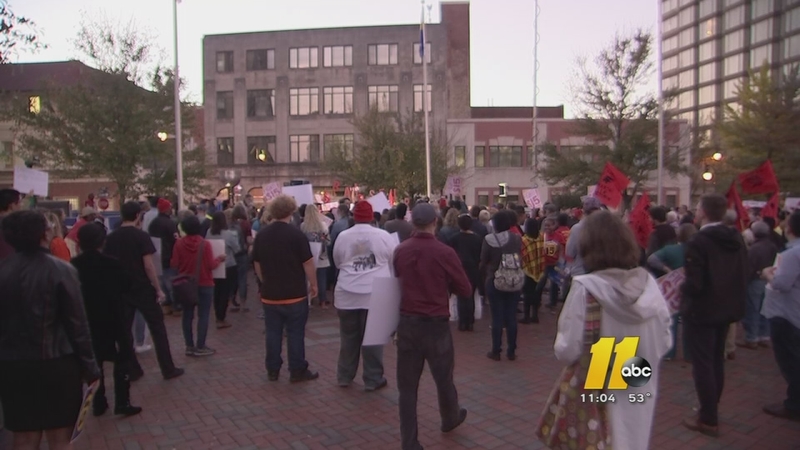 DURHAM, NC (WTVD) -- Workers from fast food chain restaurants were joined by janitors, nursing home workers, and package delivery workers Tuesday at protests around the country and in the Triangle.

It was part of an ongoing campaign called "Fight for $15." The protestors want companies to pay them at least $15 an hour. The protesters also had a message for presidential candidates: Support the cause or lose their vote next year.

Dominique McCrae, who serves fried chicken and biscuits at a Bojangles' restaurant for $7.55 an hour, joined a protest outside a McDonald's in Durham. The 23-year-old said her pay isn't enough to cover rent or diapers for her child. She dropped out of college to care for her grandfather, making finances tight.

"We just want to be able to support our families," said McCrae, who has worked at Bojangles' for two months.

Bojangles' Inc., based in Charlotte, said in a statement that it offers employees "competitive compensation."

Hundreds of protestors also packed into Durham's CCB Plaza. They said they want the right to unionize and are trying to make the case that stagnant minimum wages are keeping families locked into poverty. They insist a raise is long overdue.
"You're not talking about make us wealthy, you're just trying to have the same basic means of life for you and your children."

Asked about the protests, McDonalds said wages at its company-owned restaurants went up $1 in July, but but the majority of McDonalds locations are franchises.

Over at Burger King, the company said it respects workers' rights to demonstrate but said its franchise owners make wage decisions - not the corporate company.

The campaign began about three years ago and is funded by the Service Employees International Union, which represents low-wage workers. Several protests have been scheduled in front of fast food restaurants, garnering media attention.

This time workers are pledging not to vote for presidential candidates that do not support the campaign. Democratic candidates Hillary Clinton and Bernie Sanders both showed their support through tweets on Tuesday, and Sanders showed up at a protest outside the Senate in Washington. A protest was also planned near the Republican debates in Milwaukee Tuesday night, organizers said.

McDonald's worker Adriana Alvarez said she plans to vote for the first time next year, but only for a candidate who wants to raise wages to $15 an hour. Alvarez, who is 23 and lives in Chicago, said she makes $10.50 an hour, and higher pay can help her move out of the moldy basement apartment she shares with her 3-year-old son.

"I can find a better place," she said.

The protests are occurring against a backdrop of weak wage growth nationwide. Average hourly pay has increased at roughly a 2.2 percent annual rate since the recession ended more than six years ago.

In the retail, hotel and restaurant industries, average hourly pay for front-line workers - the roughly 80 percent who aren't managers or supervisors - is below $15. It was $14.90 in the retail industry in October, the Labor Department said last week, and $13.82 for hotel employees. Restaurant workers, on average, earned $11.51 an hour.

Economists have long debated the impact of raising the minimum wage, and some recent research has found that modest increases seldom cost many jobs.

But a jump to $15 an hour would be more than double the federal minimum of $7.25 - a much higher increase than what economists have studied. It would also be far above the minimum wage's previous peak of just under $11, adjusted for inflation, in 1968.

Yum Brands Inc., the Louisville, Kentucky-based company behind Taco Bell and KFC, said its employees are paid above minimum wage at its 2,000 company-owned stores.

At a New York rally, a few hundred people cheered and clapped. Some carried signs saying, "Lift all boats, not just yachts."

Some at the rally were not fast food workers. Liz Henry, 38, who works in environmental services at a New York hospital, makes more than $15 per hour but supports the effort for other workers.

"Even what I'm making right now is not even enough," she says. "How do they really get by? It's hard."