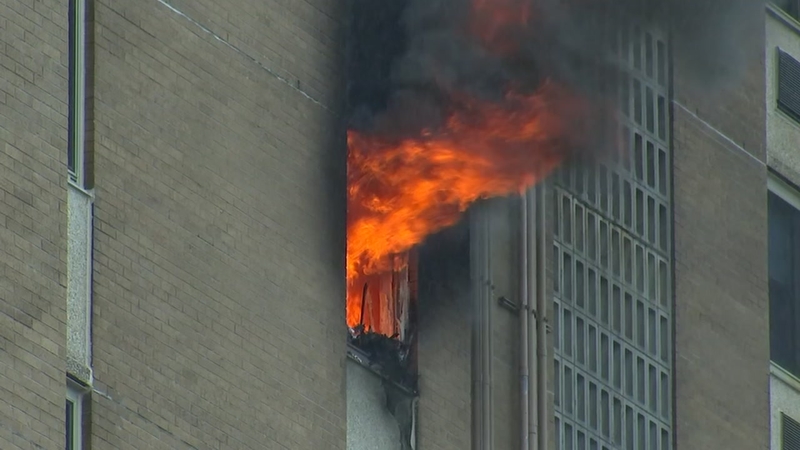 RALEIGH, N.C. (WTVD) -- Six people were hospitalized after a fire broke out at a high-rise apartment on Glenwood Avenue Friday afternoon.

The fire was reported on the 9th floor of Glenwood Towers around 1:10 p.m -- an apartment building in the 500 block of Glenwood Avenue near the Raleigh Beer Garden.

More than 100 people had to be evacuated.

Fire officials said there were smoke detectors in the building but there was no sprinkler system.

The cause of the fire was ruled accidental.

Twenty-five percent of the building was damaged, according to fire officials.

Paulette Blakey lives next door to the apartment that caught fire. She told ABC11 she knew something was wrong when she noticed her front door was burning.

Carmen Del Rio lives on the 10th floor. He said it was fortunate that the stairwells are designed in a way that kept smoke out.

"The alarm went off and usually it's nothing really special to leave the apartment for," he said. "But then I heard somebody yell, 'Oh, my God!' And when I opened my door it was nothing but smoke."

Many of the residents at the apartment building use wheelchairs so firefighters had to activate emergency elevators to get some of them to safety.

"I just pray that everybody's alright because I know at senior age it's really easy to get injured and we don't bounce back that easy," Del Rio said.

Residents on floors 1-7 were allowed to return to their apartments around 4 p.m.

Residents on floor 8, as well as 10-14, will be allowed back into their apartments Friday evening.

The Red Cross will provide assistance for residents who lived on the 9th floor.